Centuries ago royals, nobles, and charlatans forgot all rules of decency during the famous and infamous Carnival of Venice, safely hidden behind masks. Still, revellers in richly decorated costumes parade through the streets of the northern Italian city during nearly two weeks of the carnival in February. 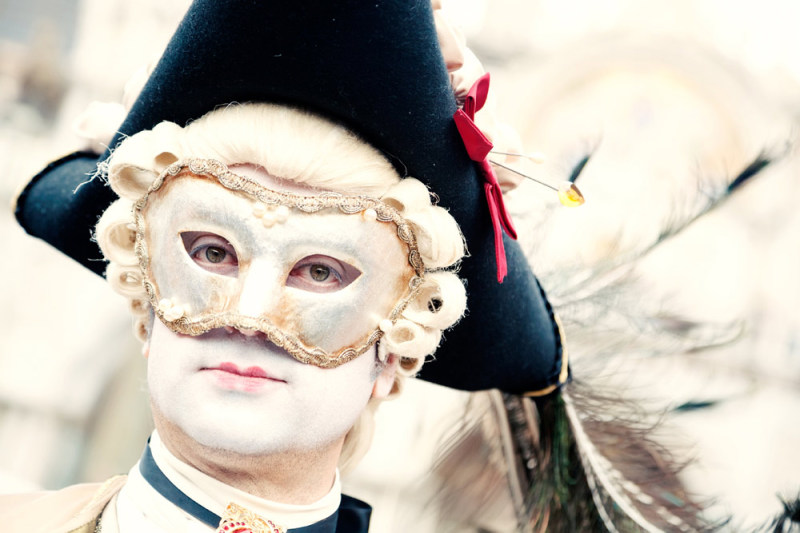 A masked man during the Carnival in Venice, Italy 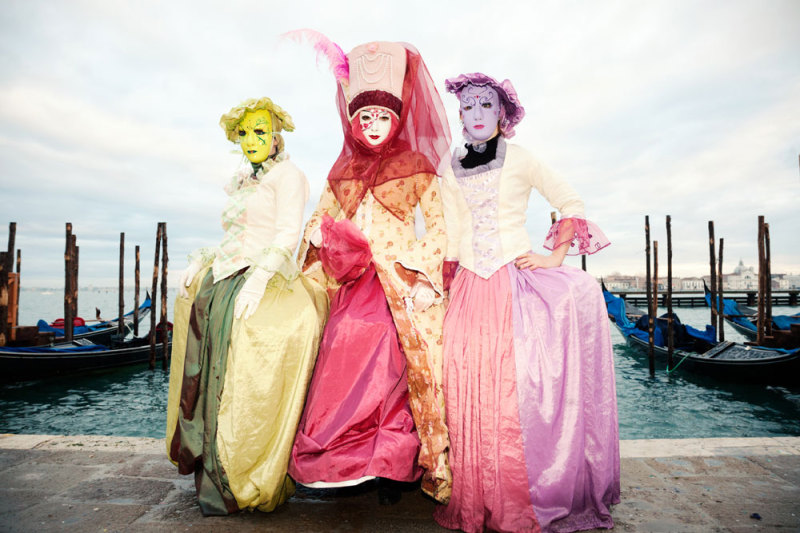 The decadence of carnival in Venice

In the streets, you see all the colours of the rainbow, loads of tulle, shiny fabrics, stylish costumes from the Belle Epoque period, fanciful hats and of course masks. For twelve days the plazas, canals, bridges and narrow streets of Venice are the decor of the unsurpassed carnival.

The ancient history alone is worth visiting Venice during carnival. In the old centuries princes, nobility, charmers, and charlatans went to decadent parties, safely hidden behind masks. Very handy; if they committed a faux pas or two, no one knew who the actual perpetrator was. Or so it was hoped, but also in those days, you heard the stories through the grapevine. 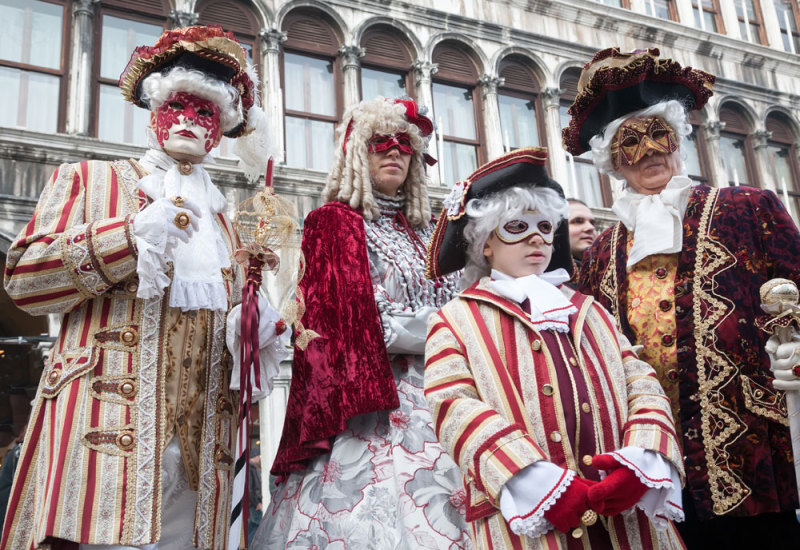 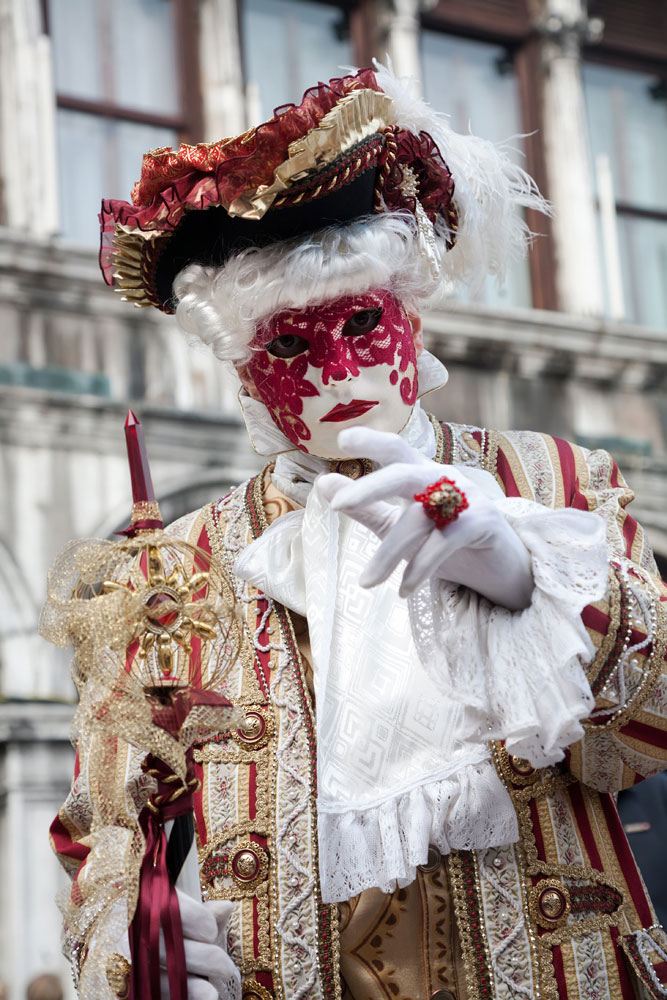 People are wearing beautiful Venetian masks during the carnival in Venice

For a whole month, cold and wintry Venice was the hottest destination in Europe. Many wealthy young people went on a Grand Tour of Europe those days as part of their upbringing. Dad paid for the expenses. Of course, they made sure to attend the carnival, not to miss anything of the lavish dinners, the ladies of easy virtue and gamble parties. They often did spend a considerable part of their family fortune. 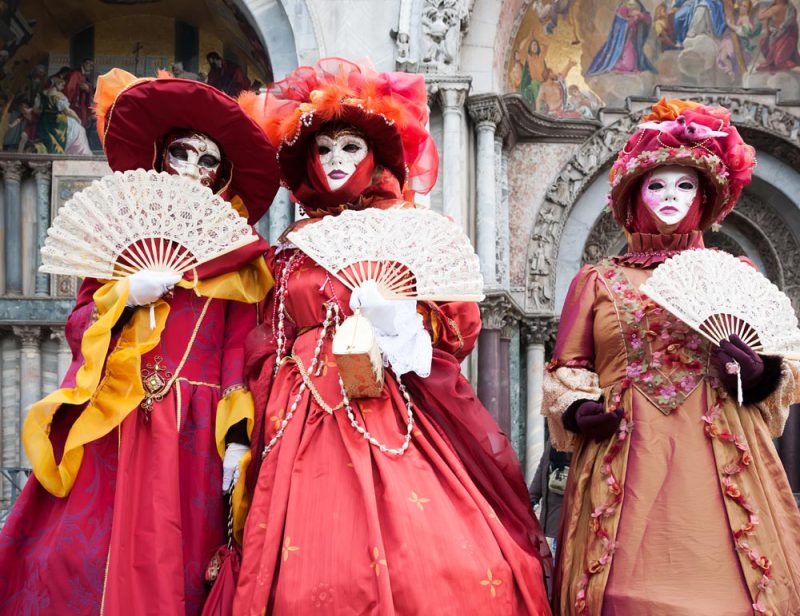 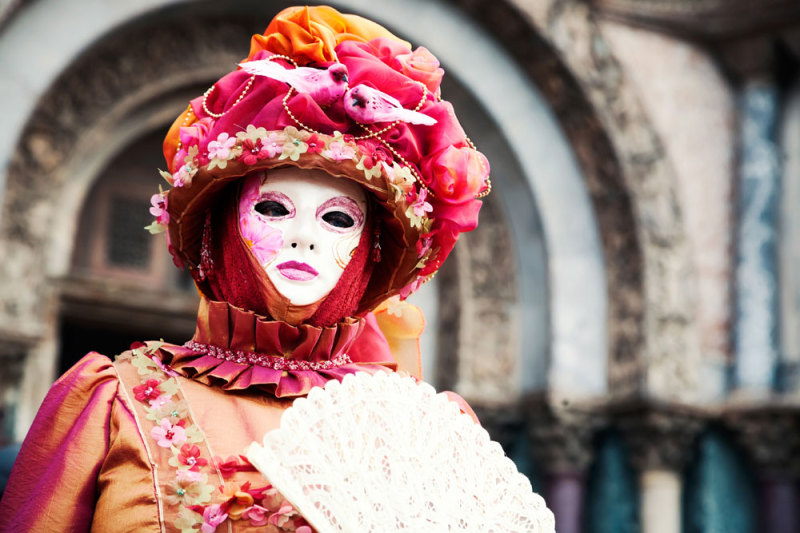 The end of the festival

Through the centuries, the distinctive masks were often banned by clergy and other leaders. But after some time the festival always revived. When Venice declined in the 17th century, the celebrations became even more exuberant. But in the end, it was Mussolini who banned the frivolous festival in 1930. It was only in the late 1970’s the Carnevale di Venezia revived. And how! Nowadays the festival lasts twelve days, but the celebrations are no less. People wear fabulous costumes, their faces hidden behind a beautiful mask. And the immoral behaviour? Well, it seems to be less… 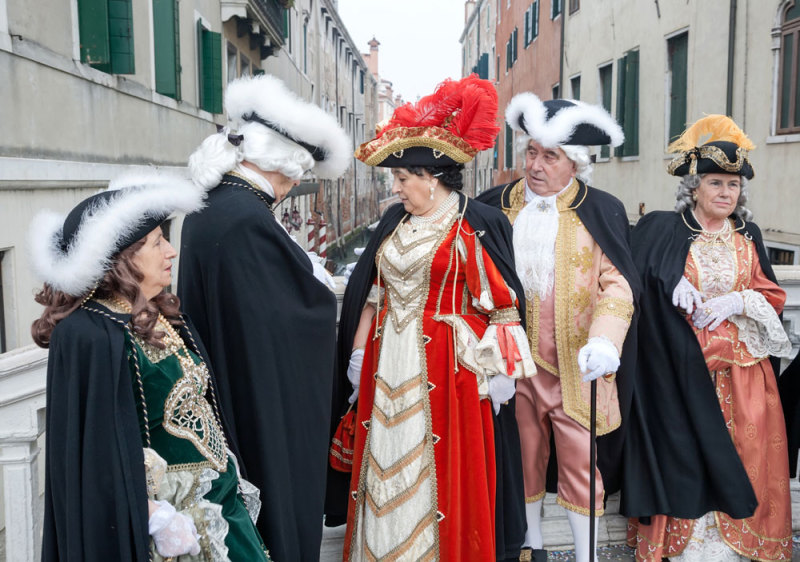 Carnival in Venice: On the way to a party.

At nightfall groups of well-to-do shuffle through the maze of narrow streets of Venice on their way to a luxury ball or a concert. On the misty canals, you see the gondolas with more party-people. Chances are they are on their way to the Luna Hotel Baglioni. Dress code Costume d’Epoque with a mask. Don’t you own a suitable outfit? No problem. The hotel has a specially equipped workshop where you can rent or buy the most elegant creations, complete with a matching mask. Of course! 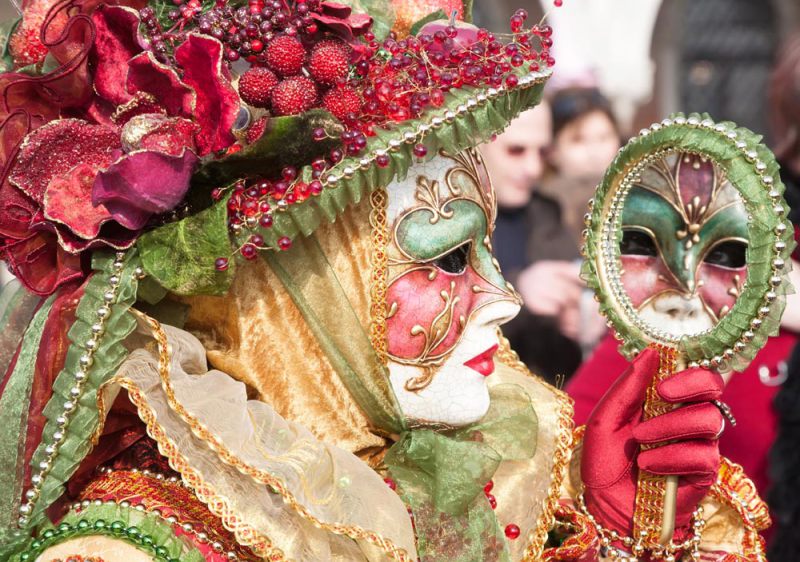 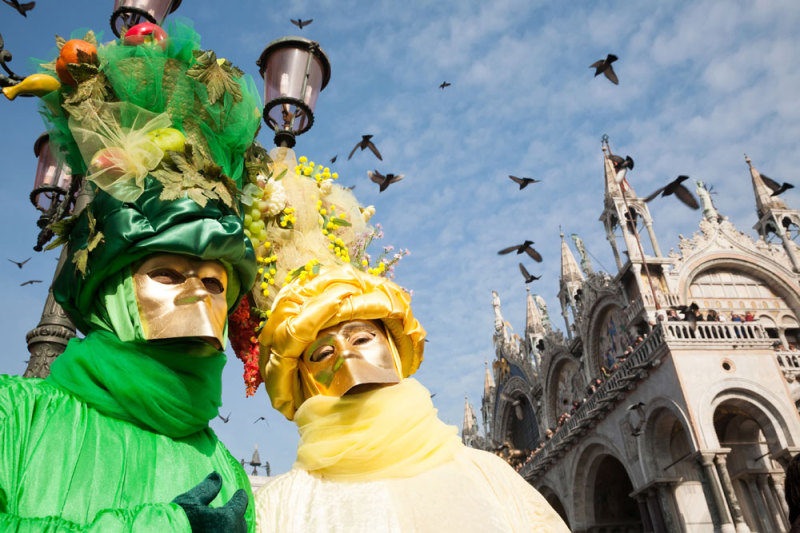 Posing in front of the Doge’s Palace in Venice, Italy

Seated on a sofa in the Fireplace Room, the happy few who managed to get a ticket for the opening event are sipping their welcome cocktail. Later on, they will probably enjoy a performance of the opera “Il Barbiere di Siviglia”. In between, there is time to get to know the fellow partygoers and to hear the latest gossip. At eight o’clock, dinner is served in the exquisite Marco Polo Ballroom decorated with unique frescoes. The dessert consists of the carnival classics: frittelle (fritters) and galani (thin fried dough cookie). Then it’s time to dance and parade so everyone can admire each other’s creations. Safely behind masks, a little flirting won’t do any harm. Once back in your daily routine nobody will recognise you. At the end of the evening, the last guests are lead to the exit with some force. But knowing that more days of celebrations will follow, brings back a smile on their lips. 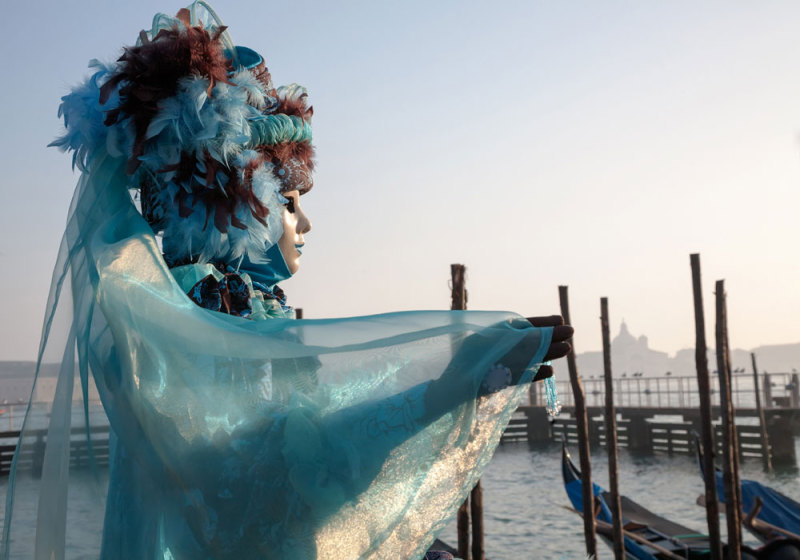 Carnival in Venice: posing at the gondolas

You can make a visit to the Carnival of Venice as exuberant and costly as you want. Every day several events are organised ranging from free concerts at St. Mark’s Square to pricey private diners-dansant, balls, music performances and tours by gondola. Hotel Monaco & Grand Canal, Palazzo Ca ‘Zanardi, and Palazzo Pisani Moretta are just some of the upscale locations where memorable celebrations are organised. But wandering around St. Mark’s Square and the surrounding streets will also get you in the carnival atmosphere. There are plenty of Venetians and visitors parading all day in their beautiful costumes, always willing to pose for a few pictures. Or relax in a café or tearoom as Caffe Lavena at St Mark’s Square with white-coated waiters and display cases full of pastries. It’s easy to imagine how life was several centuries ago. Order a Bellini, a sparkling peach cocktail that really belongs to the carnival. 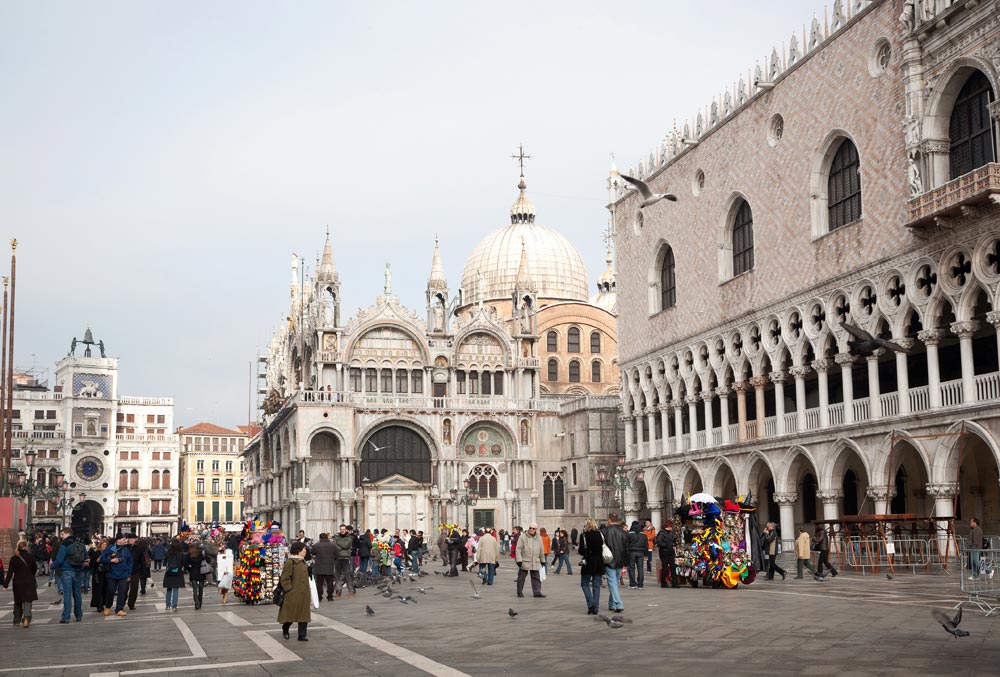 And suddenly there is a procession of men and women in authentic costumes. They celebrate Mary’s feast in which seven young women go to St. Mark’s Square. According to legend, around the year 943, it was a custom that all marriages took place at one day in the year. But that year the brides who were on their way from the Saint Nicholas Church to St. Mark’s Square were kidnapped by pirates. The pirates were found and punished by furious Venetians. And they rescued the brides.
St. Mark’s Square is also the place where acrobats on stilts show their skills, or where a cavalcade of characters parades on a stage. One of the highlights is Flying Angel. She slowly descends from the San Marco bell tower, a tradition from the 18th century that was revived early 21st century. No one in Venice seems to want to miss this event. Thousands of people occupy each corner of the square.

Historical procession during the carnival in Venice 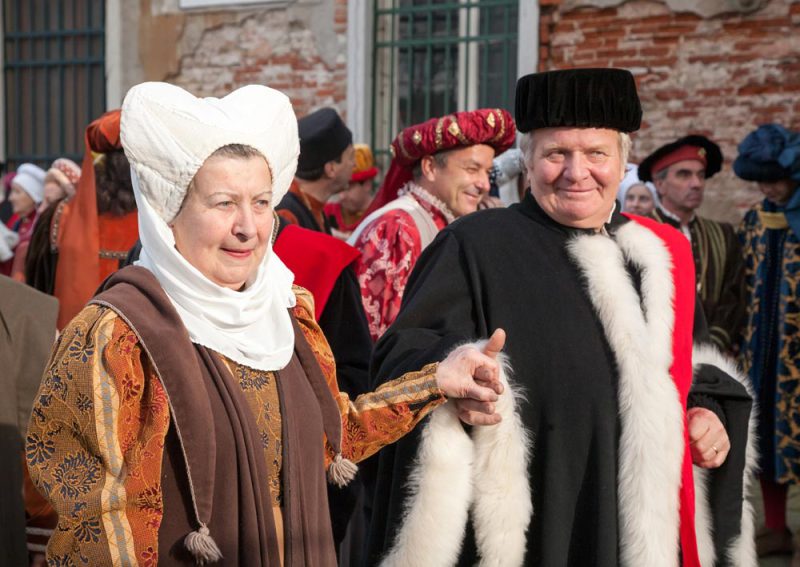 Women and men in historical costumes, Carnival in Venice, Italy 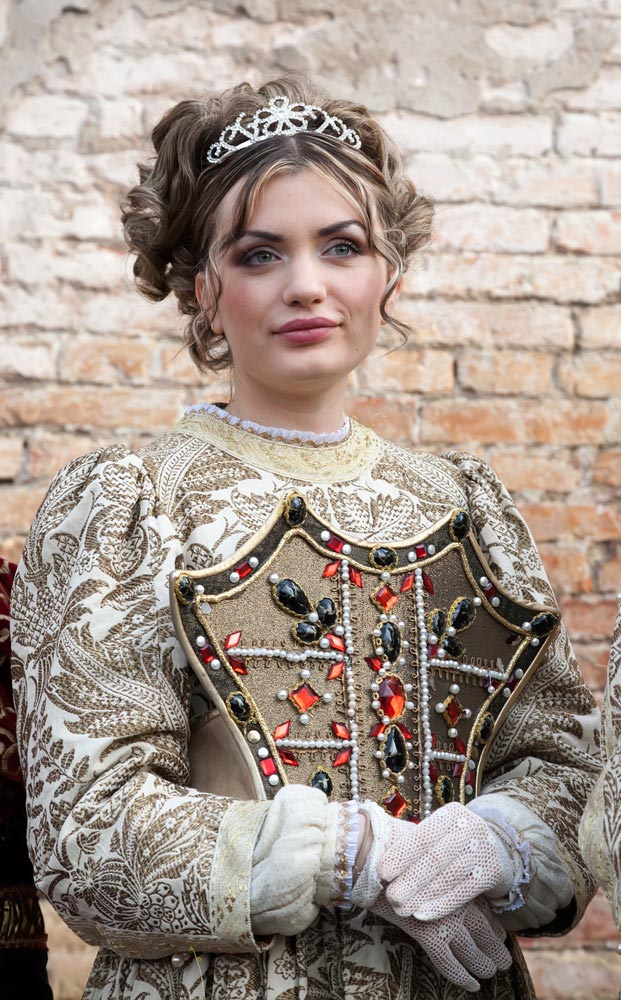 One of the Maria’s during the historical parade in Venice 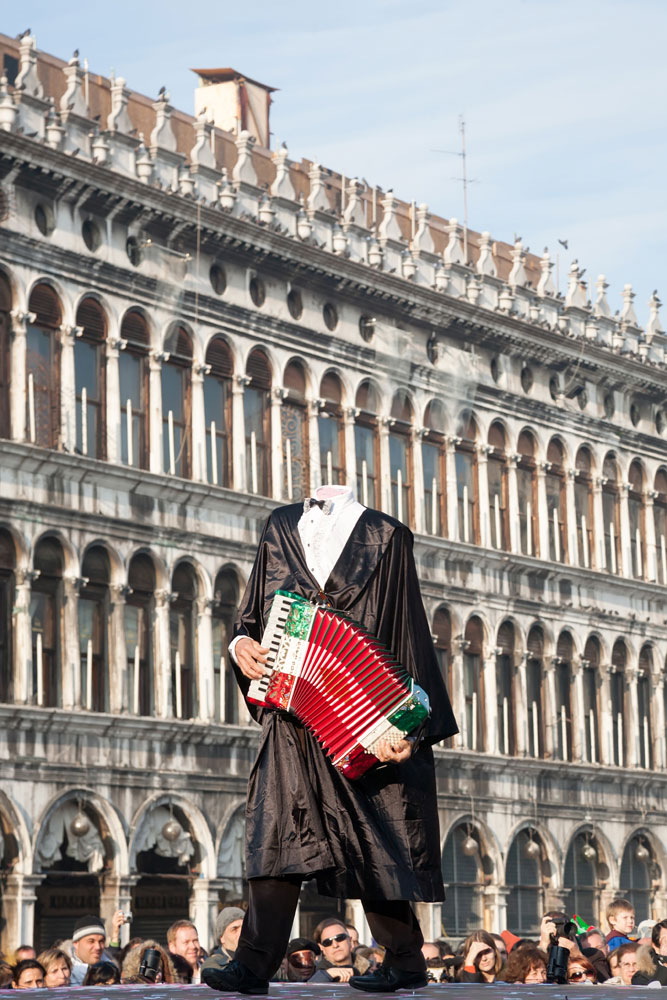 Costumes on the catwalk, Carnival in Venice, Italy 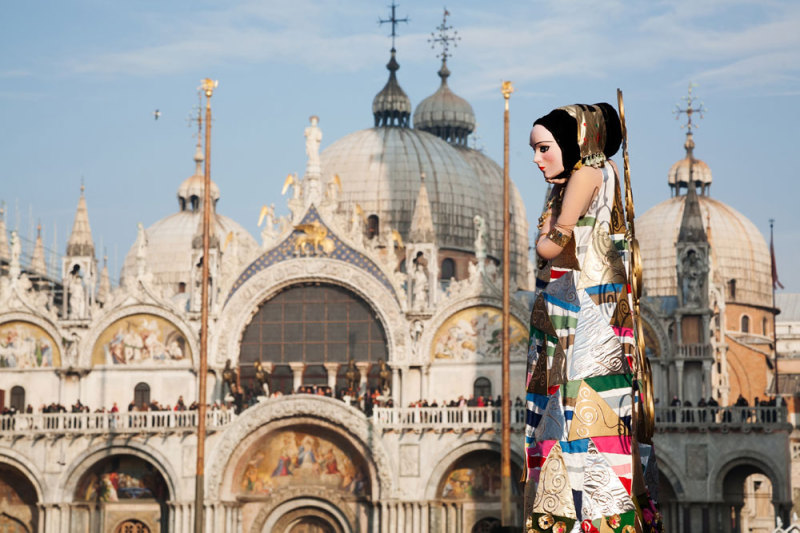 Klimt costume during the carnival in Venice, Italy

Carnival in Venice: a feast for the eye

Walking through Venice these days in February is a feast for the eye. There is the beautiful Rialto Bridge where gondolas full of costumed revellers pass by, with stunning views of the pastel-coloured houses. It looks mysterious, thanks to the almost ever-present fog. At the Ducale Palace with Gothic arches, ladies in ball gowns are resting on benches. Along the lagoon are the gondolas docked, waiting for new customers and in the narrow streets it is busy in the stores where they sell masks. For many people, a mask is the most beautiful memory of a couple of days of Carnevale di Venezia. That may well again, like centuries ago, last a whole month! 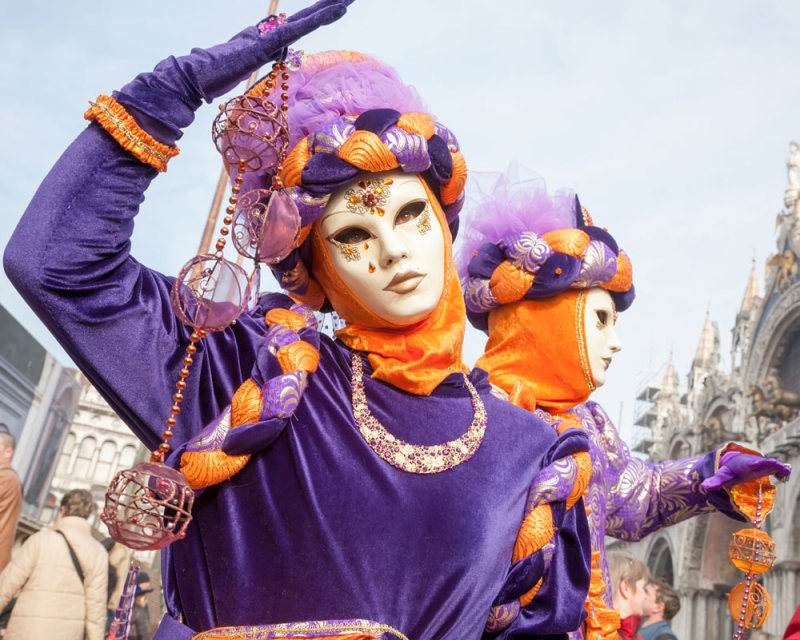 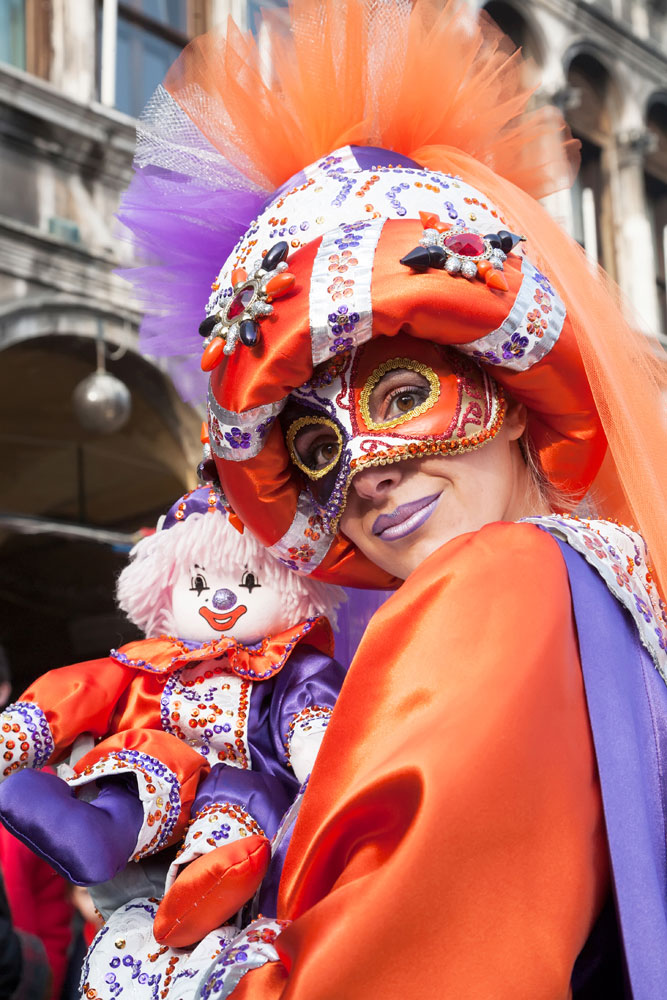 City trip: what to see and to do in Seville