Late March to early April, the temperature in Seville (Spain) climbs to 20 degrees Celsius, the perfect temperature for a city trip. Part two of my wanderings through this delightful city.

A market on excavations

Across from El Faro on the Isabel II Bridge is the old market of Triana where you find good fish, fresh fruits and vegetables. And there is a mini theatre with several dozen chairs where every now and then performance is held. Also, there is a perfect sushi bar. Next to the market is Castello de San Jorge, now a museum with excavations that are found under the market. Admission is free. The tiled domes next to the museum house a chapel. Many passers-by quickly hit a cross as they walk by. 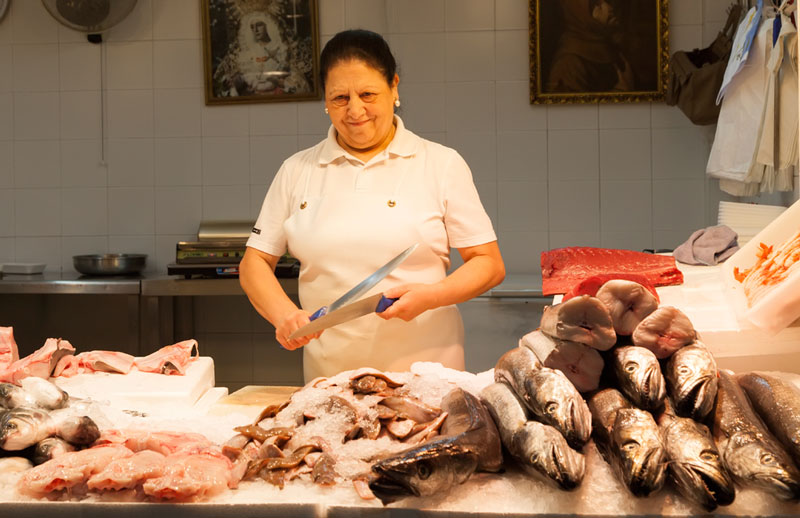 The Mercado de Triana, the market at the bridge in Seville 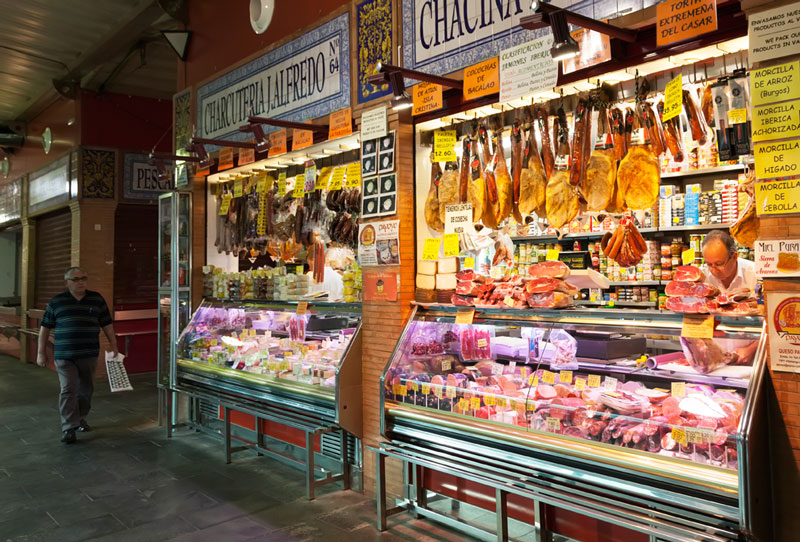 Triana was formerly a working-class district with lots of creative people. Still there live plenty of flamenco dancers, bullfighters, actors, and singers, and there are established several ceramics businesses. The Trianeros don’t consider themselves Sevillanos. Some say (jokingly) that they are going to Sevilla when they cross the bridge to the old centre. 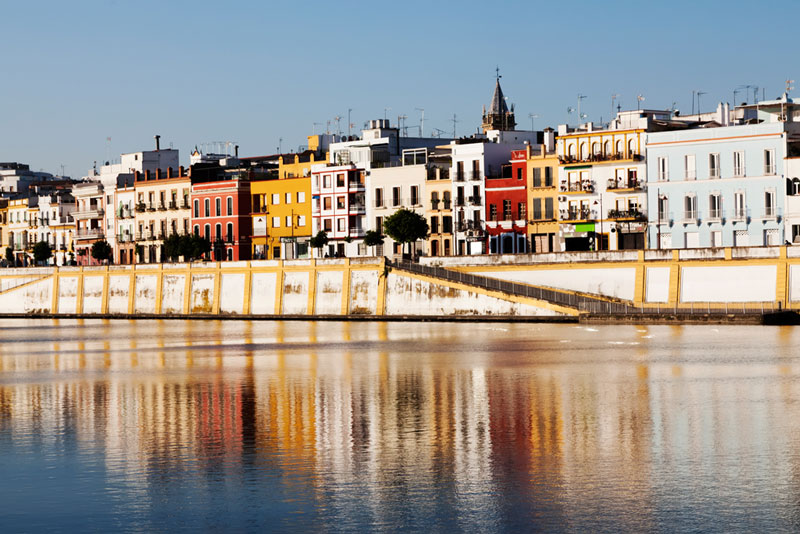 On the Triana side of the river is a museum that most tourists skip but is definitely worth visiting; CAAC (Centro Andaluz de Arte Contemporáneo) is located in an ancient monastery that later became a ceramics factory, as the thick chimneys still show. In the old areas of the monastery and factory, are changing exhibitions. 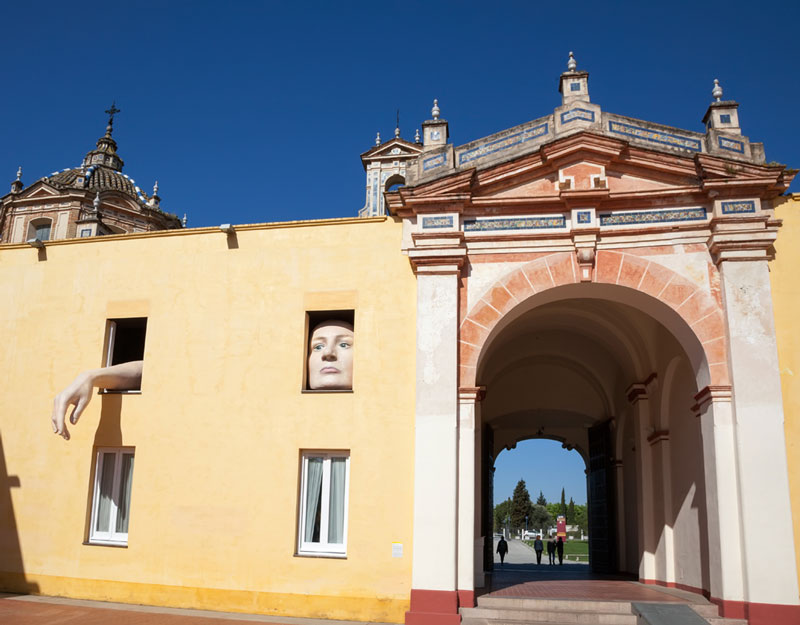 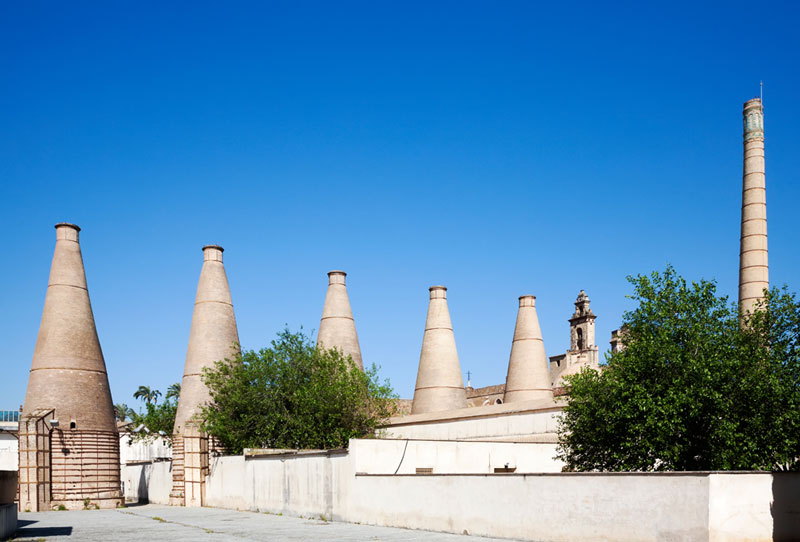 Modern art in a former factory: the CAAC museum

Stroll along the river banks

The bridge Puente de la Cartuja leads to the other side of the river. From there, it is a pleasant stroll along the shores all the way to La Torre dell’Oro. Nice and quiet and you have a chance to admire some street art along the way. 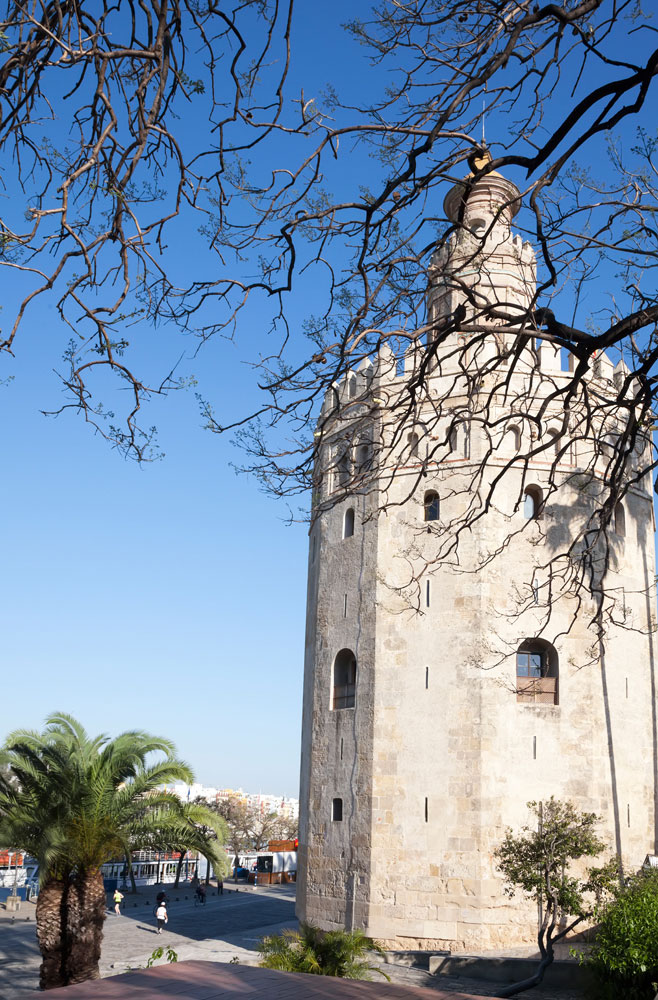 You will pass the Plaza de Toros bullfighting arena. Unfortunately, there are still bullfights held in the city. But if there are no fights, you can visit the arena. The building is really worth it. 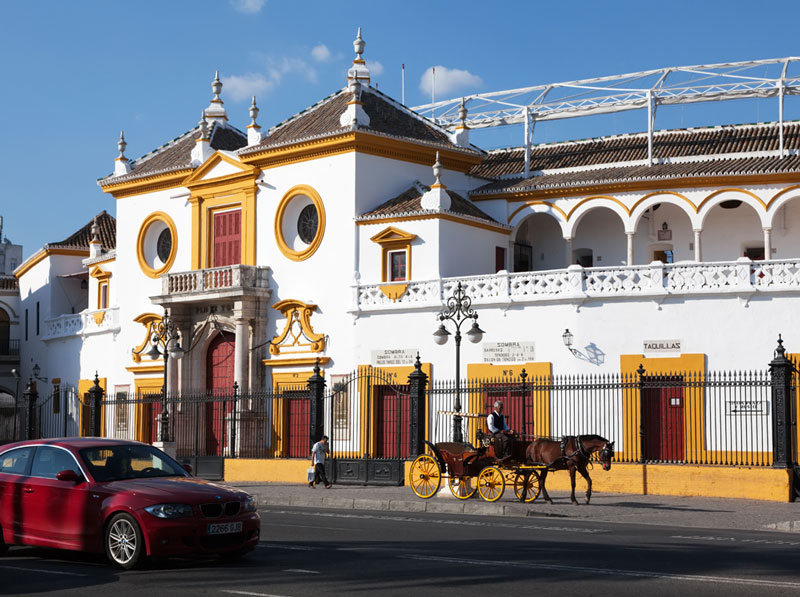 The bullfighting arena in Seville, Spain 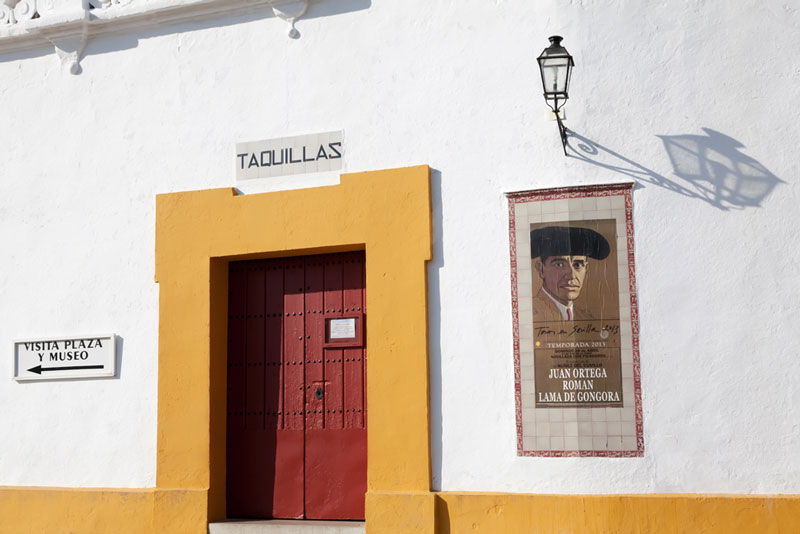 One of the entrances to the bullfighting arena

The art of eating tapas

Sevillanos are real tapeadors and tapear, or going on a tapas crawl, is a favourite pastime. One of my favourite restaurants is La Chunga, Calle Arjona 13 due to the trendy décor, which is quite unique in Seville, but also because of its creative dishes. You will eat the best salmorejo of the city. And also, the risotto with zucchini and truffle and Parmesan cheese is a good choice. The cava is a must, even if you have nothing to celebrate. La Chunga is just a few minutes walking from Puento Isabel, II but most tourists do not find it. What a pity. 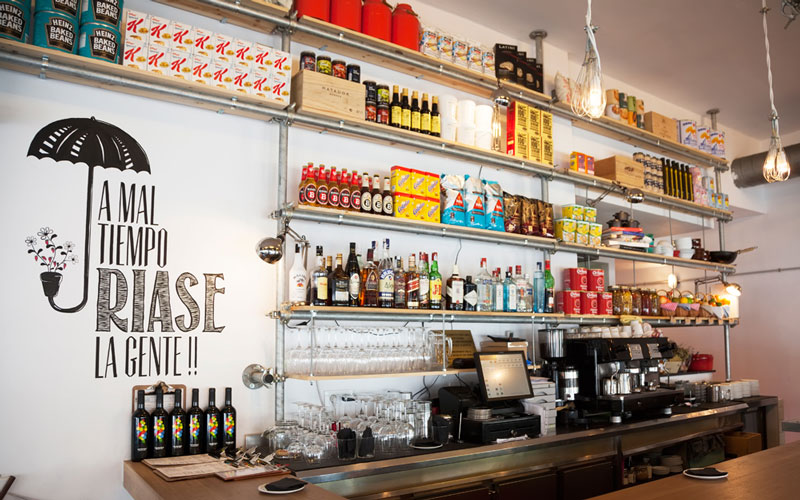 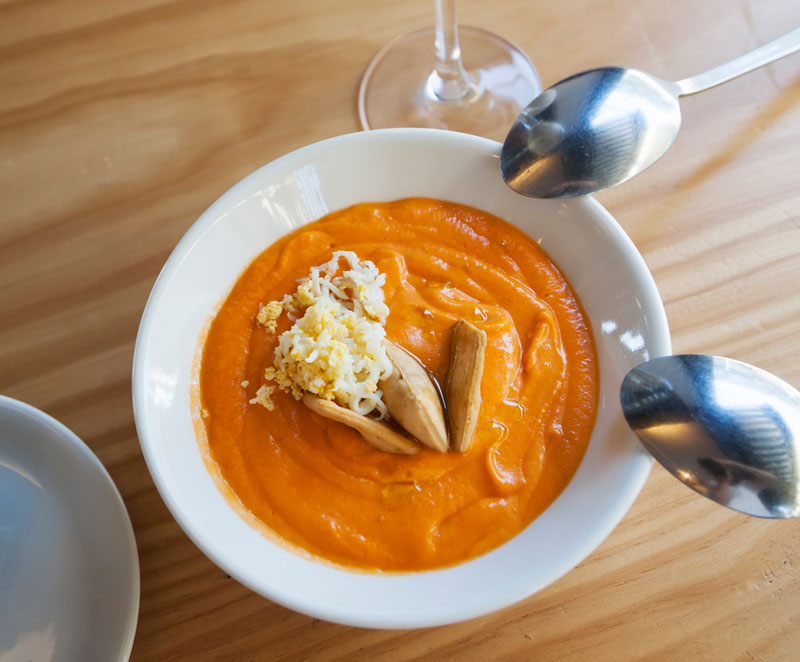 Where I also like to go to is Patio San Eloy, Calle San Eloy 9. It is a traditional restaurant with hams hanging above the bar. In the back is a tiled staircase where you can sit. It is always busy around lunchtime. One of the favourite dishes is tarta vegetal, a type of savoury pie made with white bread, vegetables, tuna, tomato, and mayonnaise. You can order a whole pie when you’re with a group or just a slice. It’s nutritious food, so sharing a slice is often enough. If you’re looking for more tapas restaurants, go to La Alameda. Once, this was the meeting place for the upper class, later it turned into a run-down neighbourhood with a lot of prostitution. But after a recent refurbishment, it has become a vibrant neighbourhood with excellent nightlife. 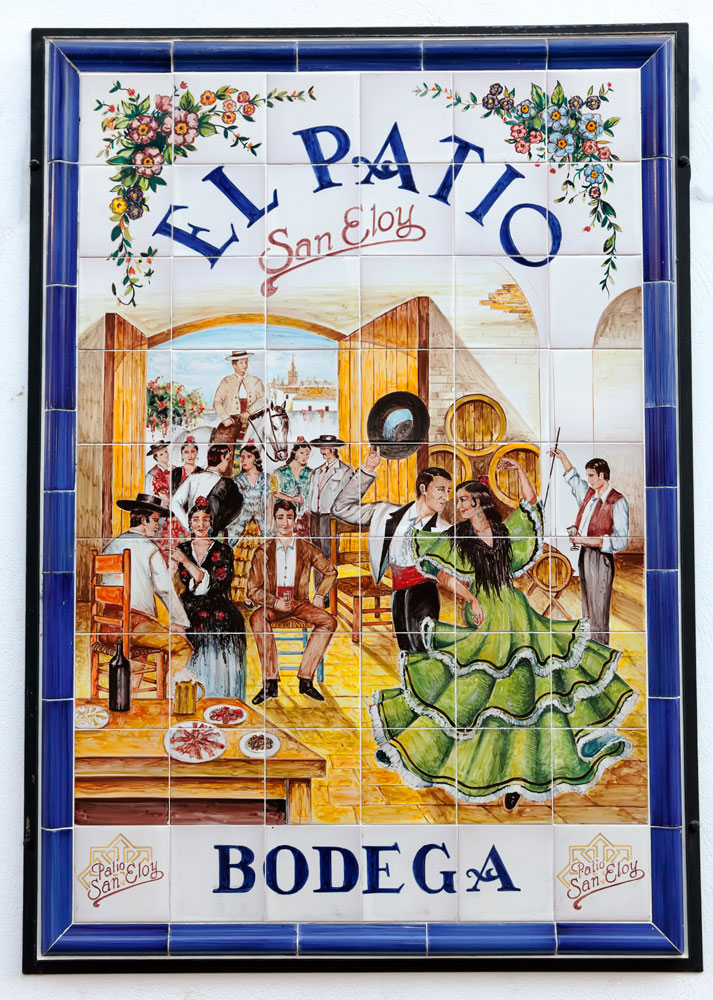 Cycling is an ideal way to explore Seville. Andalucia Bike Tour organises guided tours. They leave at ten o’clock at La Torre del Oro, Paseo de Cristóbal Colón. From there you cycle in three hours along the highlights of the city. The guides are all locals, so they can also give you great insider tips for the rest of your stay. 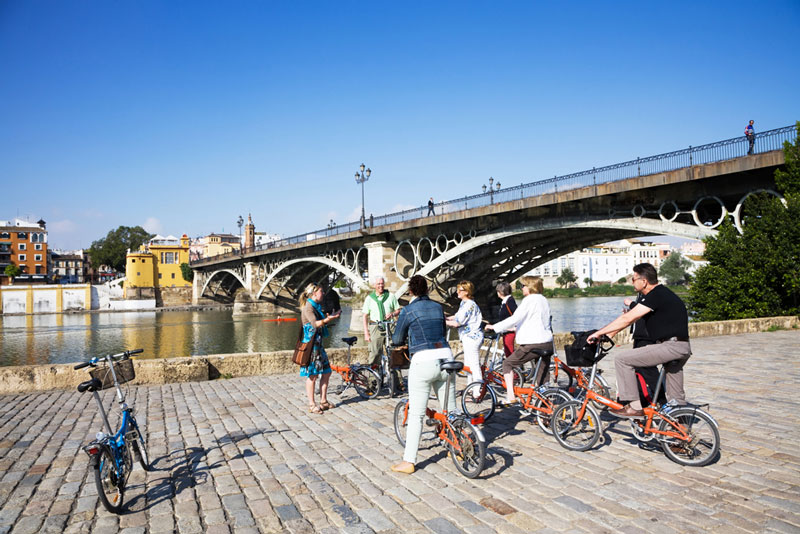 Explore the city by bike with a local

Spaniards know how to throw a party, and that can easily take a week as the Feria de Abril. You see parades, elegant women in flamenco dresses, men in sharp suits on horsebacks and carriages drive back and forth to the city centre. Order a rebujito (sherry mixed with a soft drink) and join the party! 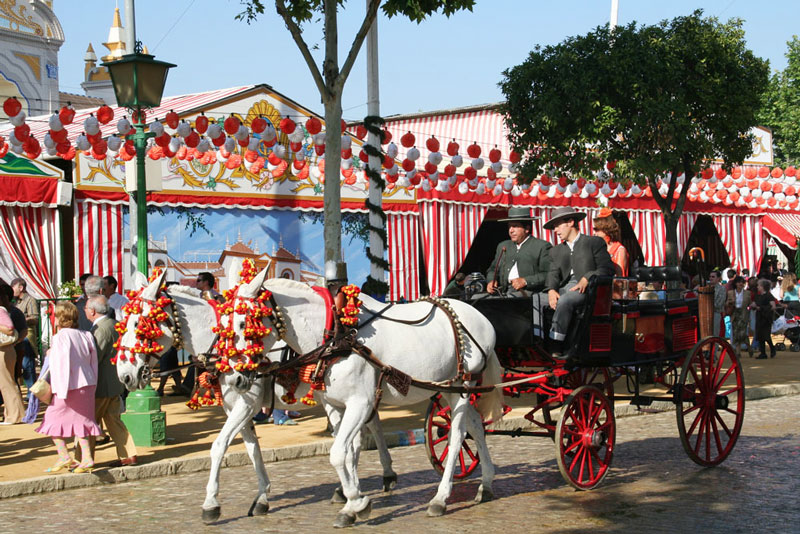 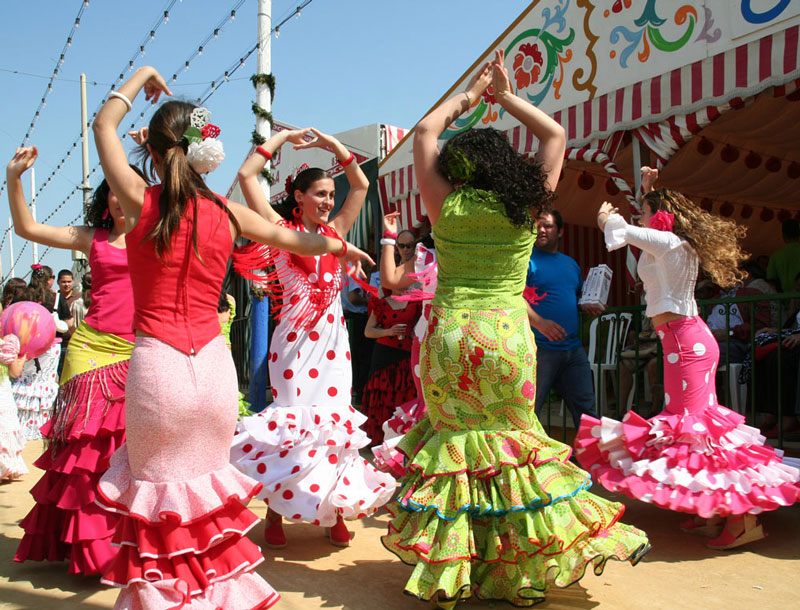 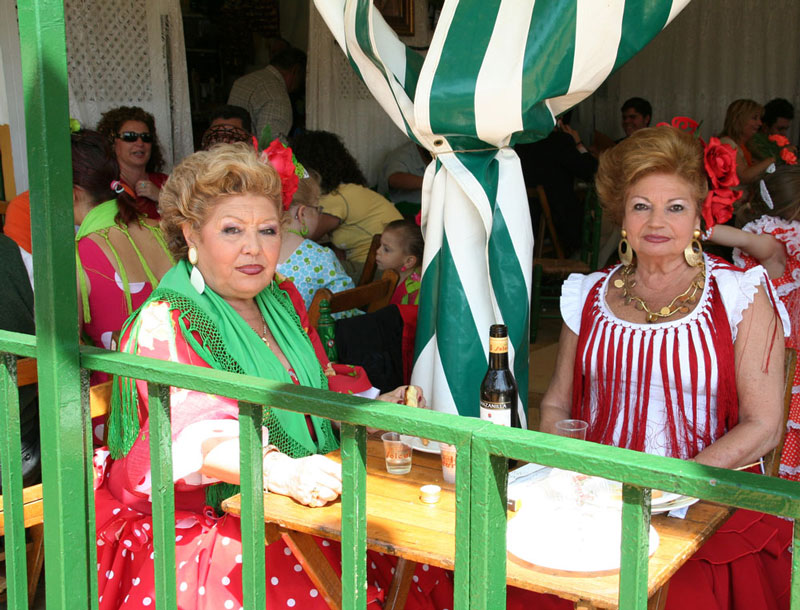 Women in flamenco dresses in Seville

Looking for a hotel?