If you’ve ever been in Portugal, you may have noticed the numerous azulejos, the beautiful tiles on Portuguese houses and churches, especially along the coast. But other types of ceramics and porcelain are as popular in Portugal. I went to investigate. My journey starts in Caldas da Rainha. 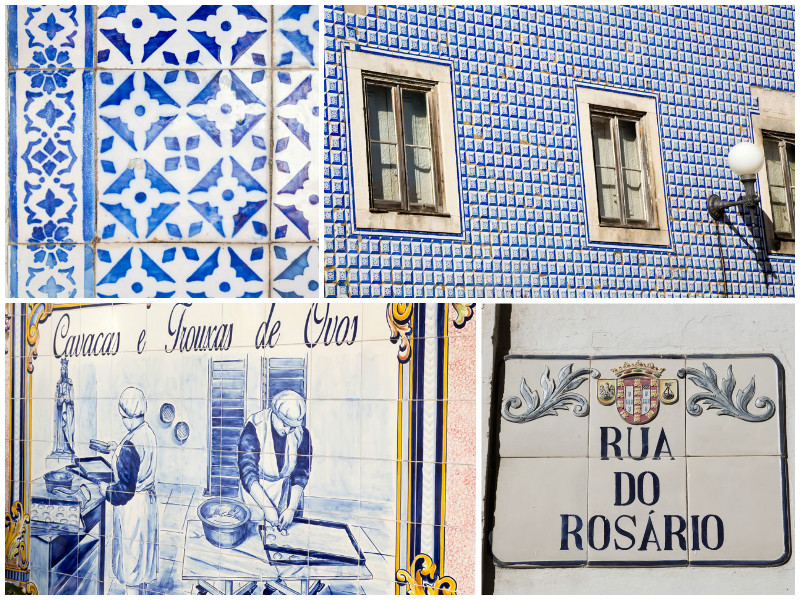 Even the nameplates are made of ceramics in Caldas da Rainha

Walk into whatever street, and you see them: the colourful houses. Every house owner selected his own favourite tiles, and that’s why the streets are so picturesque now. Decorating the houses with tiles had several reasons. The tiles reflect the sun in the summer and keep the house fresh. But in fishing villages, they have the additional advantage that they protect homes against the salt water and the wind and that the walls are easy to clean. Just scrub, and the penetrating smell of fish disappears. And yes, it is also just beautiful, all the different colourful tiles on the houses. 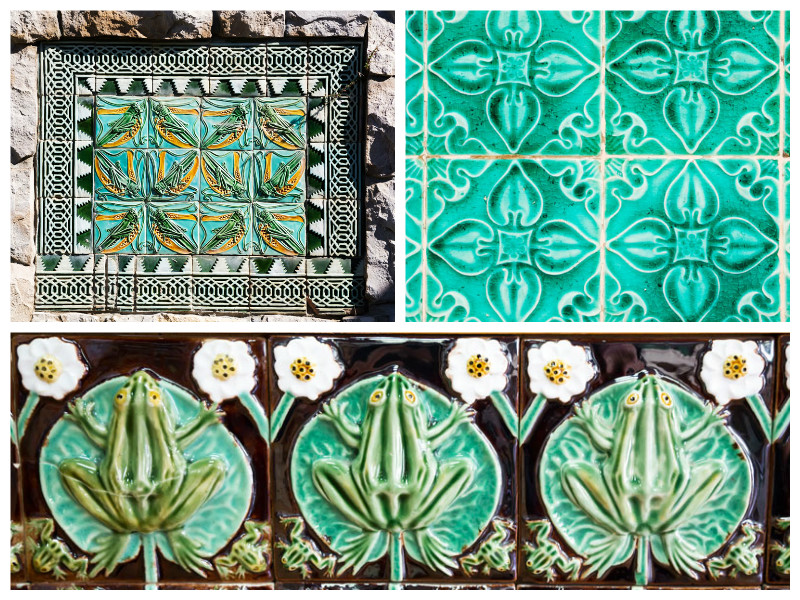 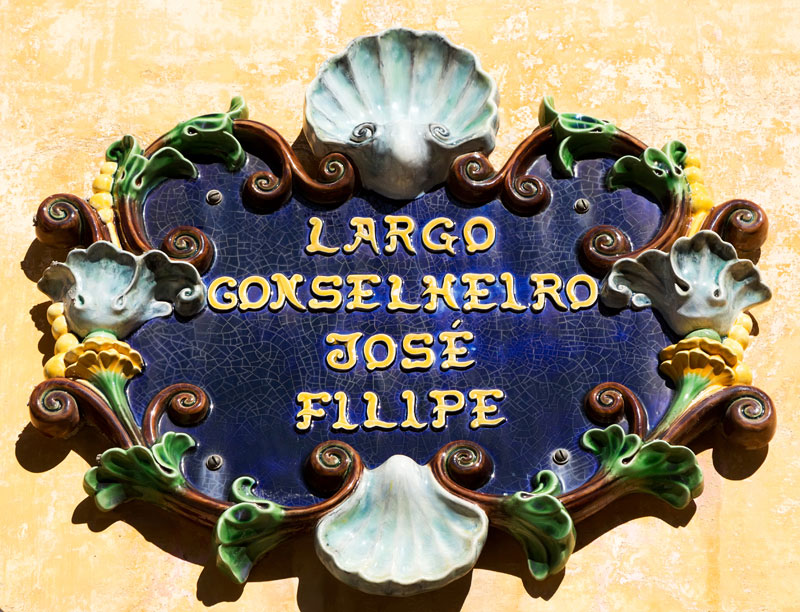 The Portuguese Queen Leonor, after whom Caldas da Rainha is named, was a remarkable woman who stood up for the poor. Her love for Caldas came when she discovered that the sulphurous water that flows here was good for her rheumatism. She immediately builds a thermal hospital. The town was very in vogue in the 19th century because the rich and famous came to cure. The elite was walking in the beautiful park, lost money in the casino, made sure to see and be seen, and came to rest in this charming village not far from the coast 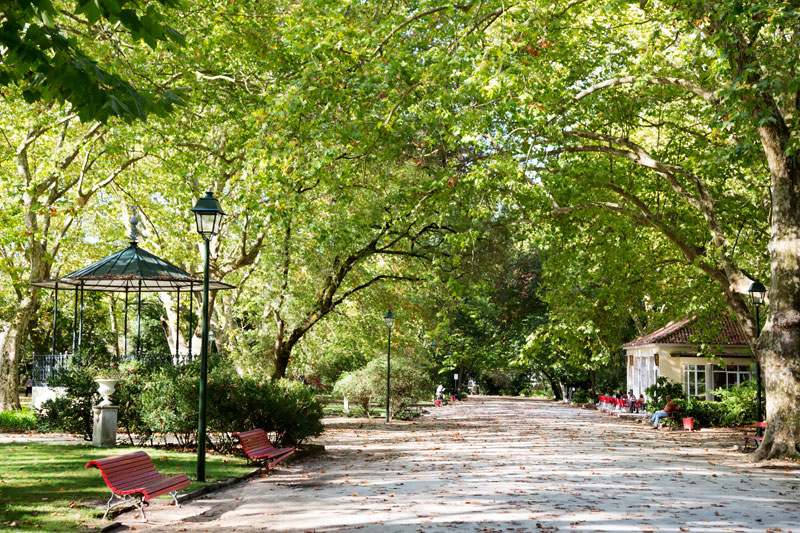 Strolling through the city, I smell a penetrating sulphur odour near the old hospital, which is still in use by the way. Stinky steam cloud escapes a small pit. The healthy water still flows here. After visiting the lovely little hospital church that’s richly decorated with tiles and wood with the gold leaf, I arrive at the daily farmers market full of fresh fruit and colourful flowers. On the terrace, at the end of the market, I enjoy the view of the market activities while drinking a good espresso. With that, I taste the speciality of the city, the beijinhos das Caldas, or the cushion of Caldas. It’s a kind of crunchy profiterole but without the creamy filling. Light and delicious. 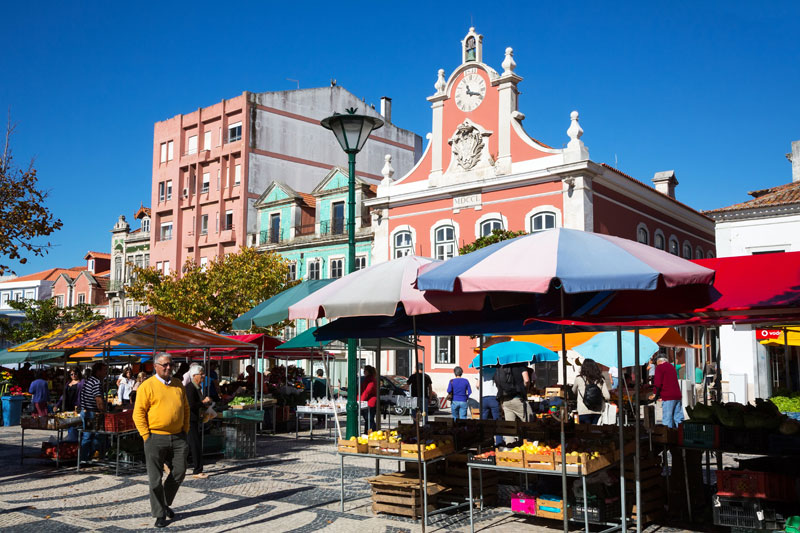 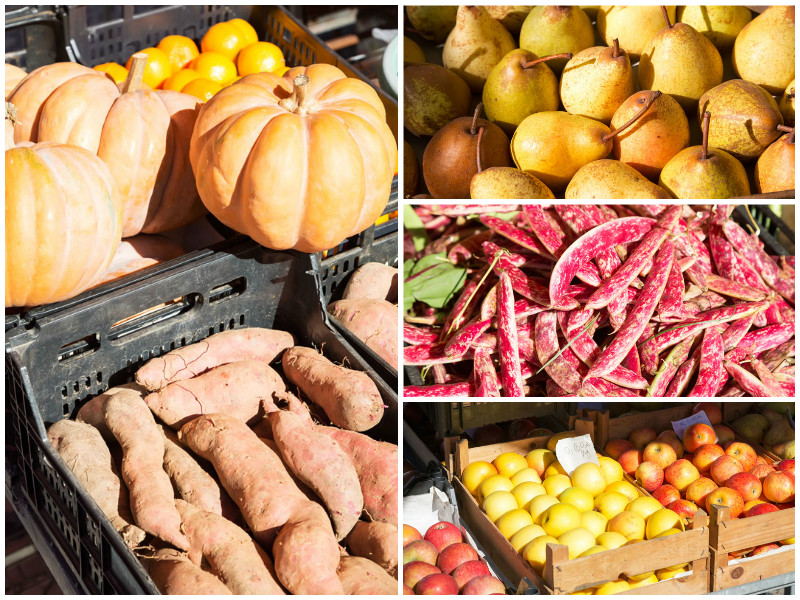 Fresh vegetables on the market in Caldas da Rainha 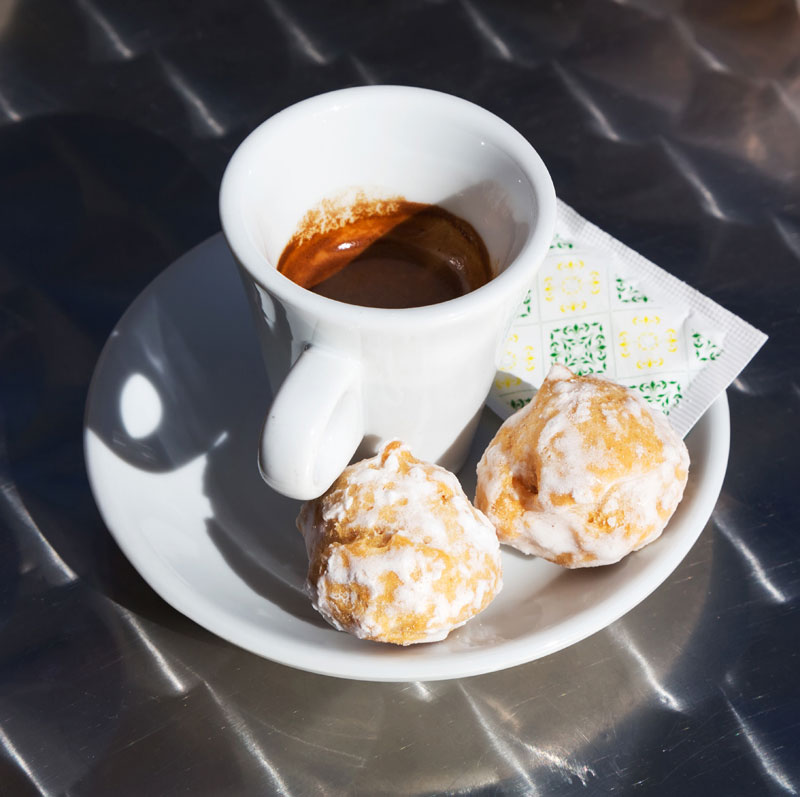 It’s perfect the profiterole was light because I booked a table at Casa Antero for an introduction to the Portuguese petiscos (tapas). The tavern looks cosy inside, but on this sunny October day the mercury rises above 25 degrees, so I choose a table on the terrace under the umbrellas. Soon the table is filled with bowls of squid in phyllo, spinach croquettes, fresh cheese with olive oil and herbs, sweet potato on mackerel and sardines and marinated beans served in a small sardine tin. The presentation is sublime. Even the broad beans that I usually don’t like are deliciously crunchy and spicy. Then the waitress brought soft skate wing and octopus, tender and served in a bottle. Of course, I eat a lot more than is good for me. Portuguese petiscos are definitely high on my list of favourites.\ 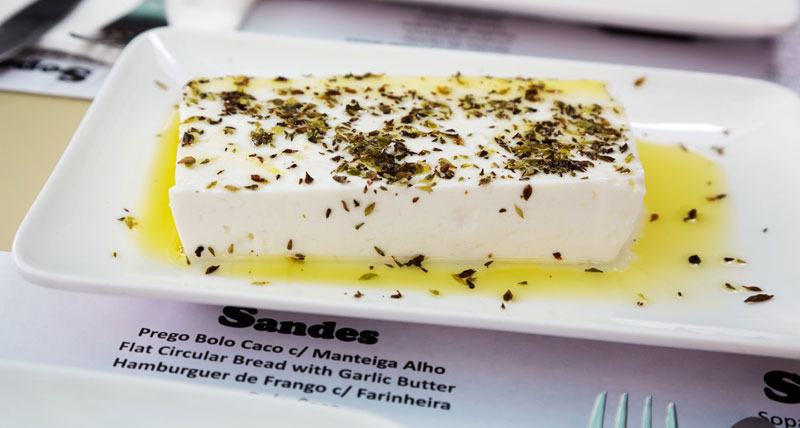 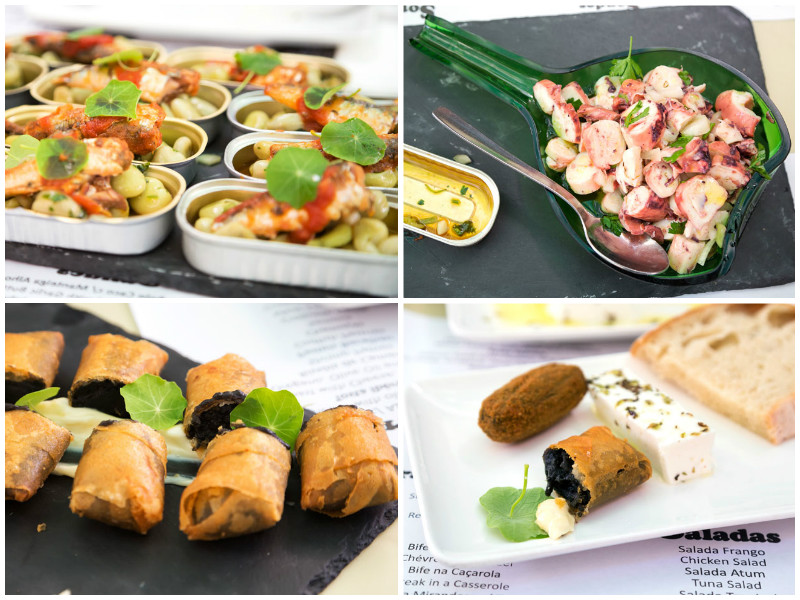 Everywhere in Caldas da Rainha are man-high statues of ceramics. The figurines were coined by journalist and cartoonist Bordallo Pinheiro who decided to make caricatures of ceramics. The midwife, the policeman, the priest but also a huge cat and a fountain full of frogs have taken over the city.
The factory shop (rua Rafael Bordallo Pinheiro, 53) sells are moving figurines but also many other designs such as plates and dishes, often with the theme of animals or vegetables. 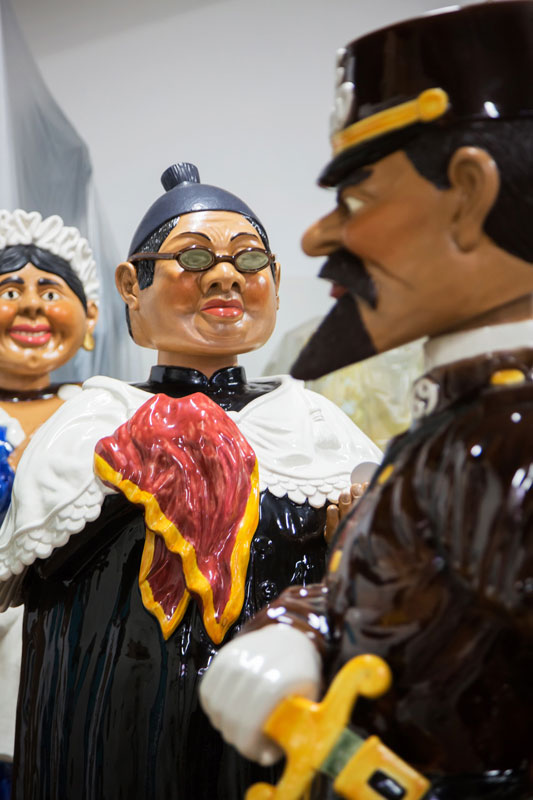 Is it art or kitsch? Work of Rafael Bordallo Pinheiro 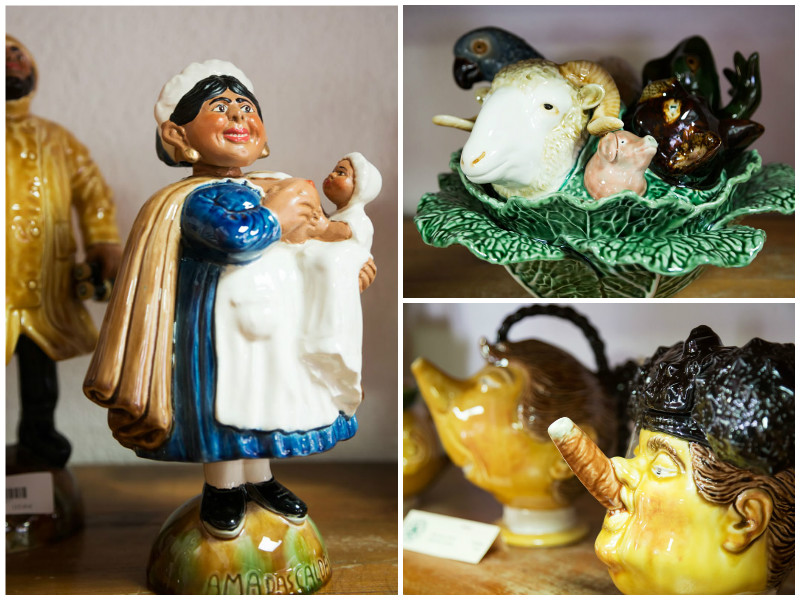 Typical ceramics of the region 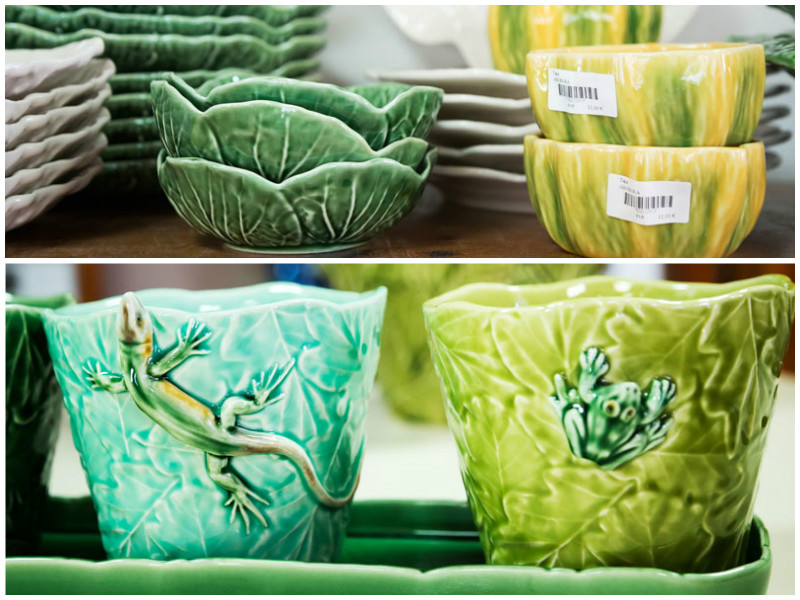 Dishes and plates, typical ceramics of the region 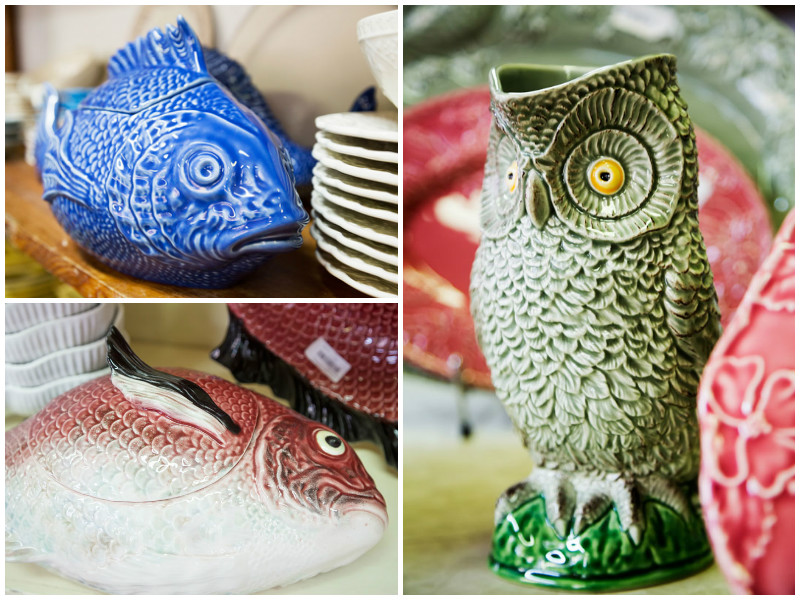 The fashion in tiles

It seems a bit pointless to walk into an almost all-white town during a search for tiles. Because yes, in Obidos the houses are all whitewashed with a lick of yellow or blue paint around windows and doors. The part of Obidos built by the Romans lies on a hillside and is surrounded by high city walls which you can walk on. An imposing gate leads you into the main street, and it is precisely that gate where you find some beautiful tile panels. Fortunately, there is also a small church in Obidos which is beautifully decorated with tiles inside. It proved to be an excellent alternative to the carpets they use in the northern, colder countries. 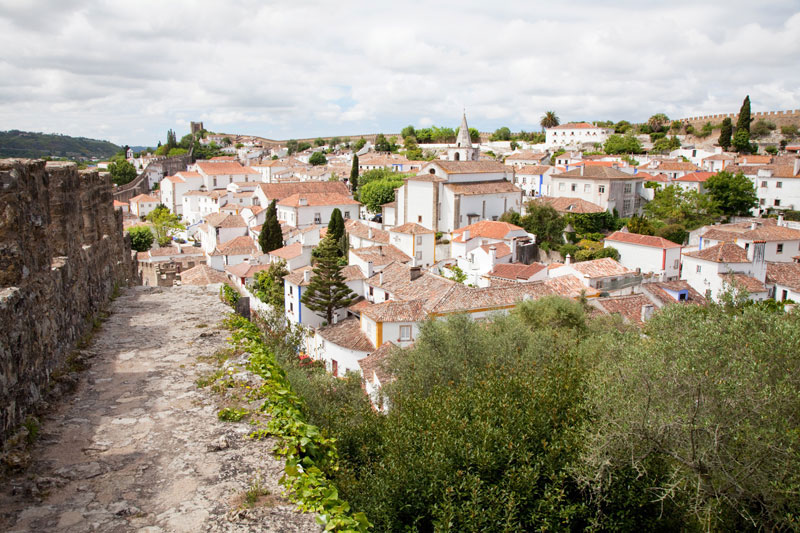 Walking over the city walls of Obidos 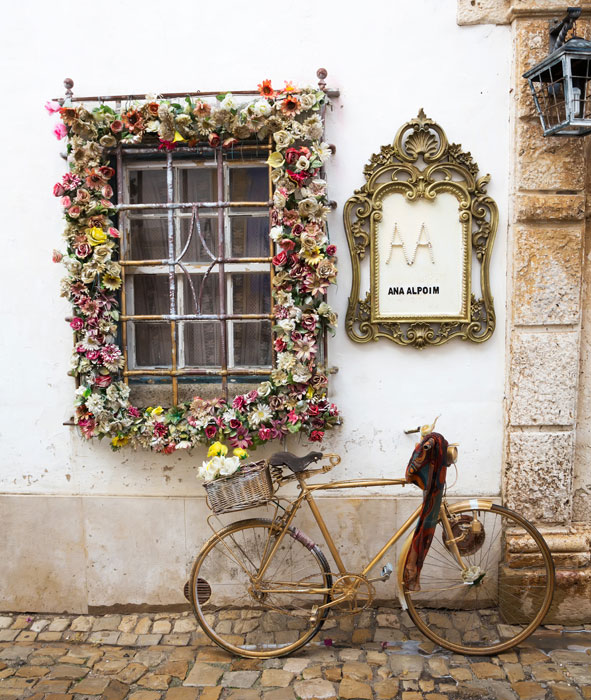 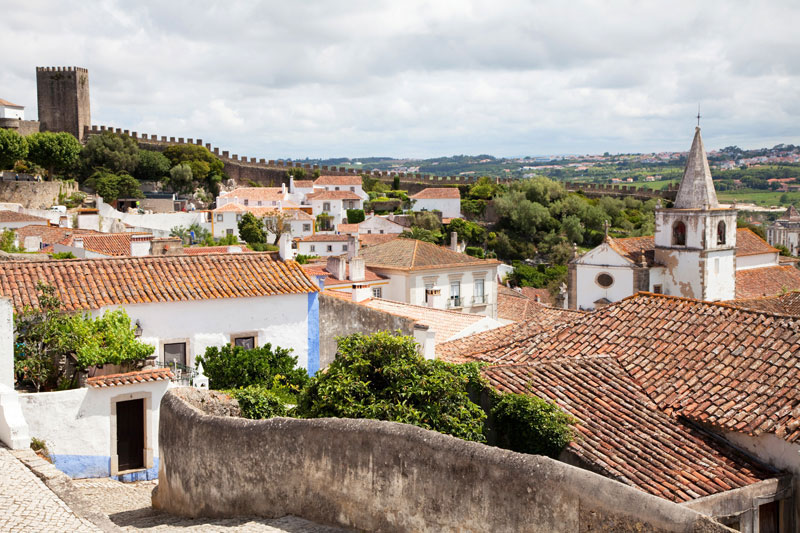 View from the city walls of Obidos, Portugal 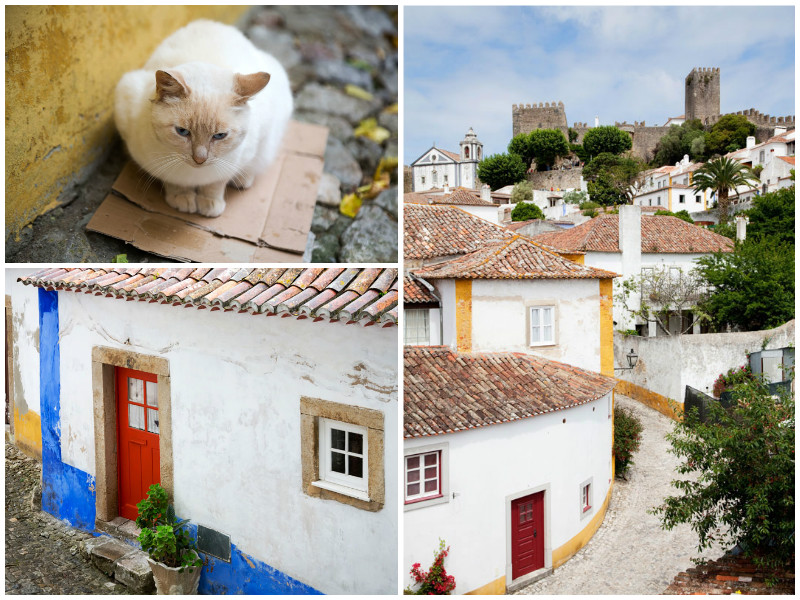 The whitewashed houses of Obidos, even the cat is white!

The oldest mosaics in the church in Obidos date back to the 16th century. You can read the whole history of Portuguese tile off of the walls. It started with the period during which tiles had geometric motifs inspired by the Arab style. Then, once it was discovered how you could apply multiple colours on a tile, they became much more colourful. In the 18th century, blue and white tiles were the trend, thanks to the Chinese and the Dutch Delfts Blauw. The Dutch were inspired by the Chinese as a result of their trade with the Far East. After that, the Portuguese developed a preference for multi-coloured tiles again. Funny to see that the designers of tile panels were initially not yet fully aware of how much a tile would shrink during baking. Here and there are some extra rows inserted. So if you go to church in Obidos, look for the flaws. 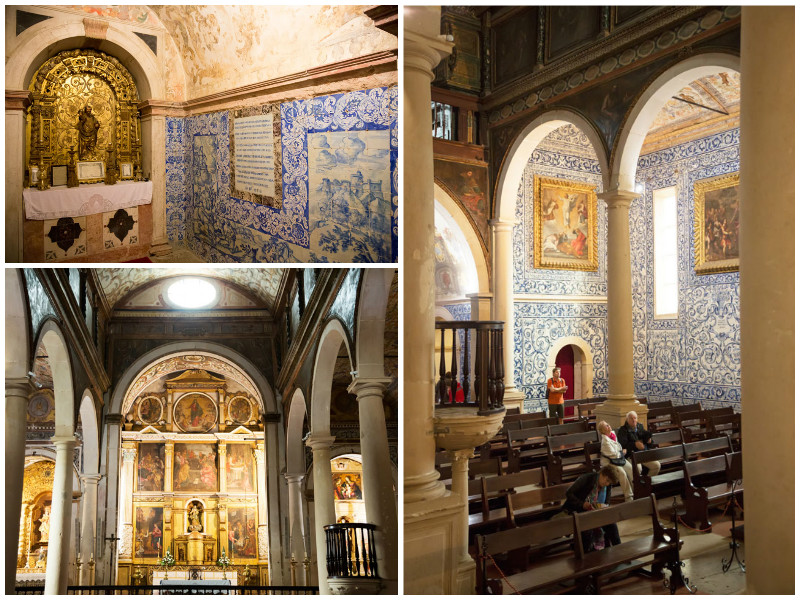 A church full of tiles in Obidos 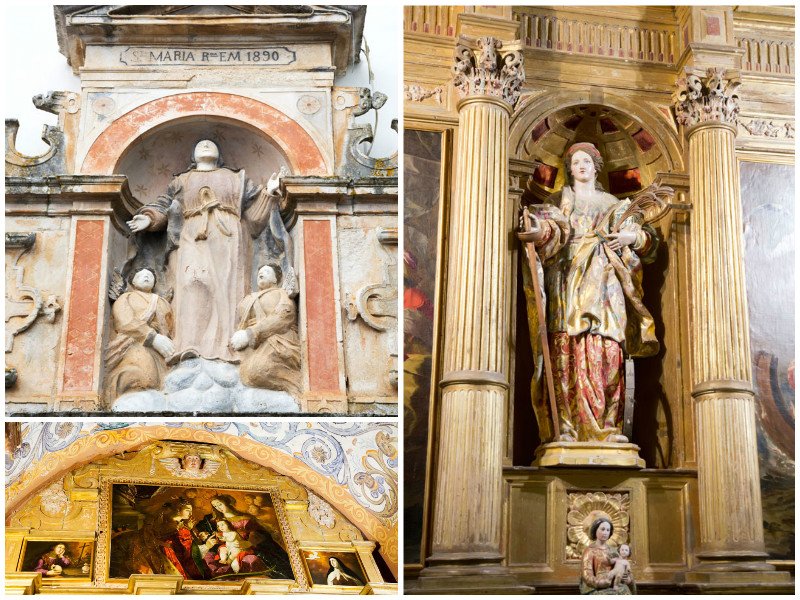 The lavishly decorated church of Obidos

This is the first part of the tile tour through the center of Portugal. In part 2 I explore student city Coimbra with one of the most beautiful libraries in the world. And in part 3 I visit the factory where kings and celebrities make their ceramics.

This website uses cookies to improve your experience while you navigate through the website. Out of these, the cookies that are categorized as necessary are stored on your browser as they are essential for the working of basic functionalities of the website. We also use third-party cookies that help us analyze and understand how you use this website. These cookies will be stored in your browser only with your consent. You also have the option to opt-out of these cookies. But opting out of some of these cookies may affect your browsing experience.
Necessary Always Enabled

Any cookies that may not be particularly necessary for the website to function and is used specifically to collect user personal data via analytics, ads, other embedded contents are termed as non-necessary cookies. It is mandatory to procure user consent prior to running these cookies on your website.