On the Isle of Wight, just below the south coast of England, life takes a slow pace. Together with the rugged and varied landscape it makes the island an ideal destination for cyclists. 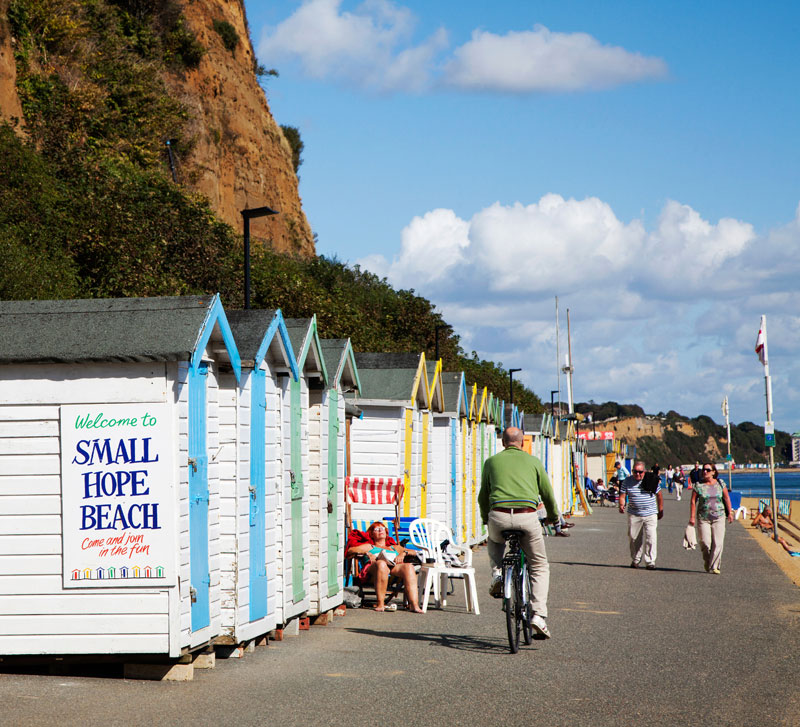 Shanklin Old Village, at the top of the cliff, is a cosy town with tearooms (of course), the fish & chip shop (as expected) and fortunately good restaurants. There is also a small park, a duck pond and there are a few lovely pubs. Downhill is the golden sandy beach. And it’s there at the Esplanade where the cycling and walking path of Sandown Bay starts. It leads me past endless rows of brightly coloured beach huts. The wooden hideaways have funny names like Home is where the cabin is. From Shanklin to Sandown, a lively tourist resort, is just a short ride. But there are so many nice beach cafés that a stop is inevitable. Here in the southwest, the coast loses land every year because of tough winds and a rough sea. Especially after big storms, the island reveals its secrets: fossil remains and footprints of dinosaurs that lived here 120 million years ago. 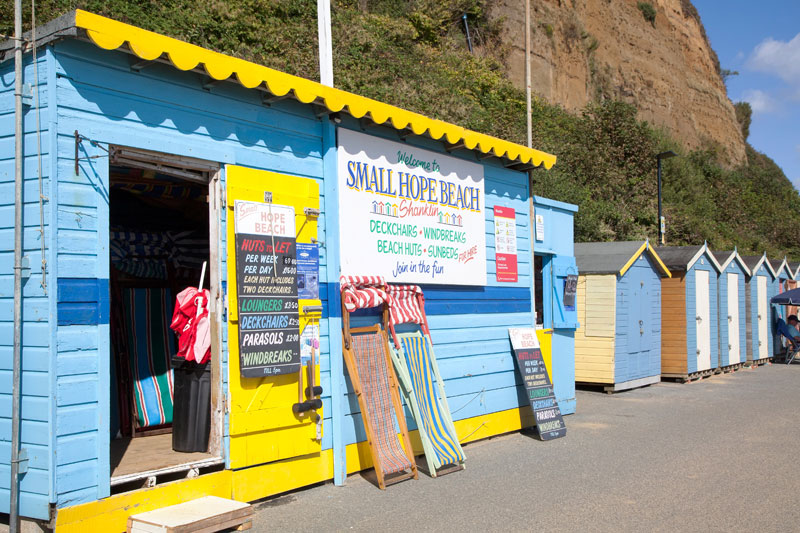 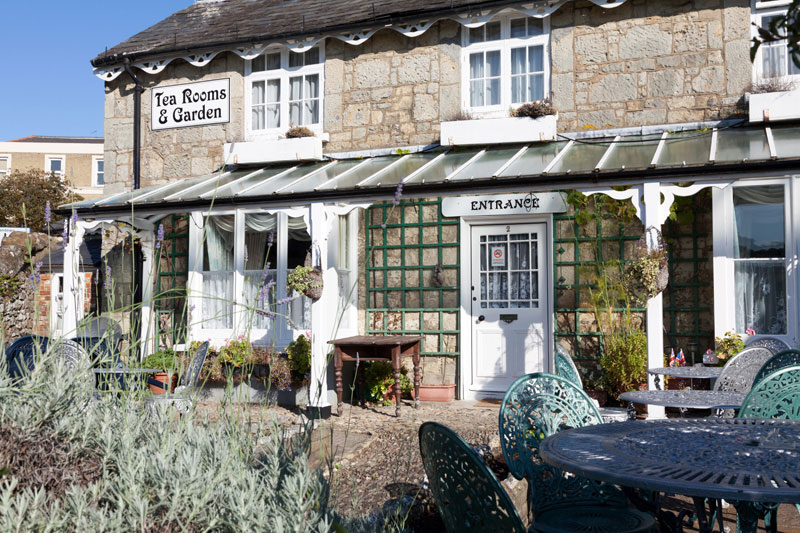 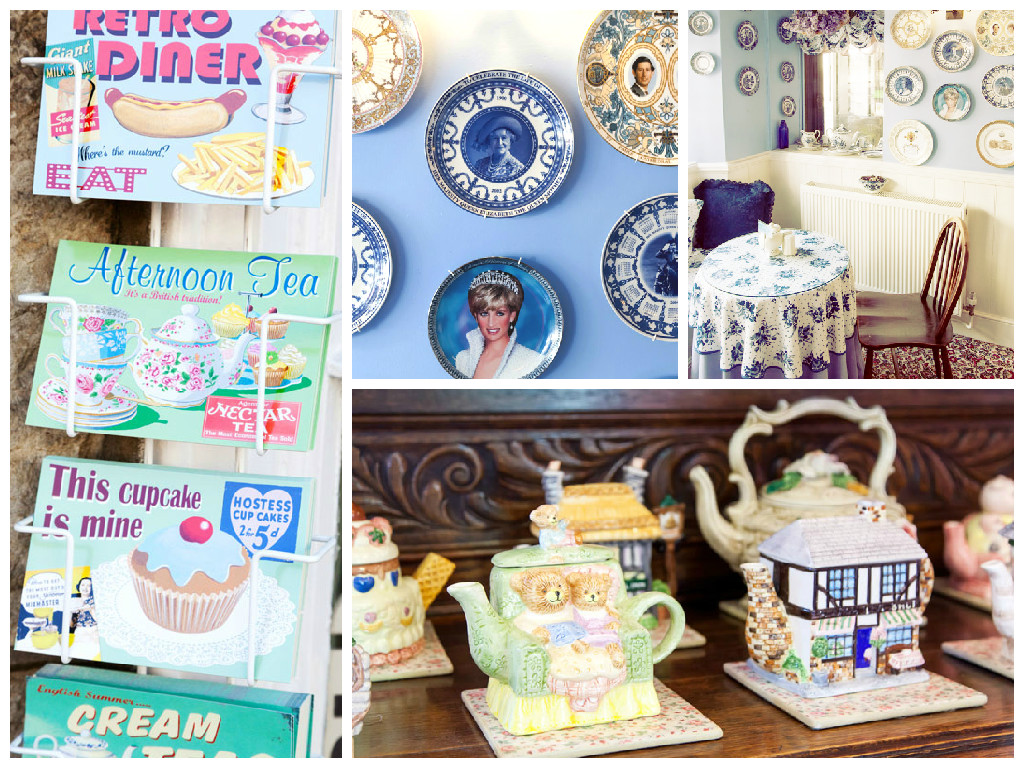 Isle of Wight: a crushed diamond

On the map, the South Island resembles a crushed diamond. A compact gem with a great variety of landscapes: from oak and pine forests to swamps and farmland to dramatic cliffs and beaches. The one even more beautiful than the other. Almost half of Isle of Wight bears the classification Area of Outstanding National Beauty. To discover all that, there are miles and miles of hiking and cycling trails. 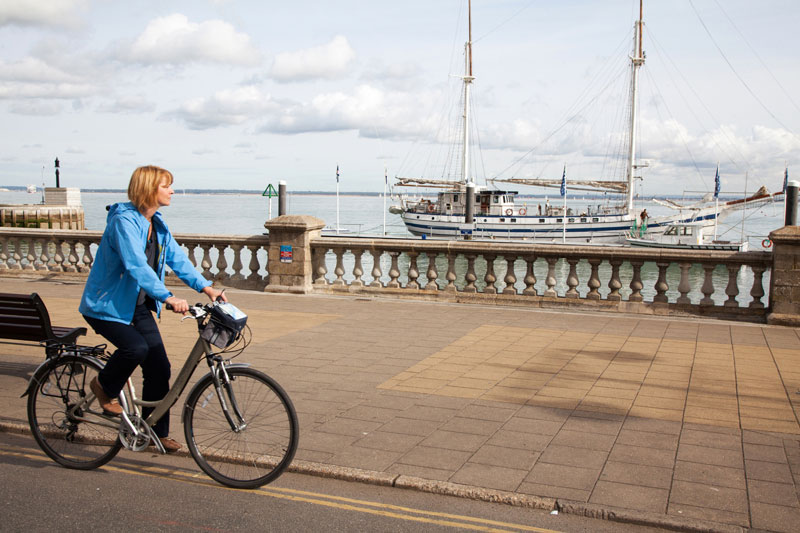 Cycling holiday at the Isle of White: Cowes

Along the cycling trail between Sandown and the port of Cowes (National Route 23) also runs a piece of the Wetland Walk, flanked by inviting bushes full of blackberries. Near Merston I notice signs of the Troll Trail. Nice for kids. Along a small river, I cycle in the direction of the capital Newport, located in the heart of the diamond. It’s full of charming boutiques and therefore popular among shoppers. Cowes is another half an hour away. But most cyclists make a pit stop at the terrace of The Bargeman’s Rest at the Little London Quay. Further along the banks, I notice beautiful old shipyards and warehouses, where they used to build all kinds of boats, ships and even hovercrafts. 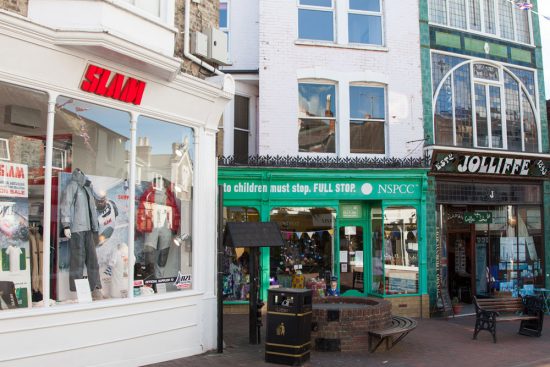 Shopping in Cowes, Isle of Wight

The marina of Cowes

Cowes has an internationally renowned marina: it is not only home to the Cowes Week, the king of the regattas, but also the Royal Yacht Squadron is located there, the world’s most exclusive yacht club. The Medina River splits this city at the northern tip of the island in two: West Cowes is the lively commercial centre and East Cowes is known for its industrial heritage and royal connections. The Cowes Floating Bridge, one of the few still active chain ferries in Britain, links both. 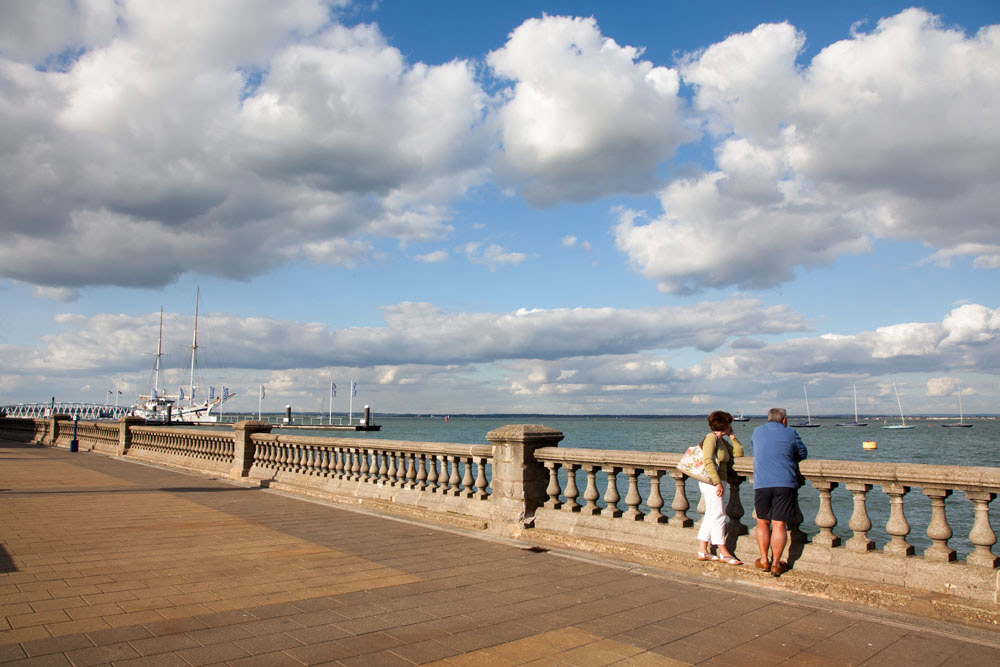 Cowes at the Isle of Wight, England

Osborne House in East Cowes served as the family home of Queen Victoria, Prince Albert and their nine children. Here, not far from Buckingham Palace in London, they found their privacy. After Albert deceased at only 42 years of age, the mourning Victoria led a secluded life. In 1901 she died at Wight. While I take a stroll through the palace, I almost get the impression that the family still resides here. Family portraits adorn the walls and the house is full of personal items that Britain’s longest-serving monarch and her husband had brought together. The highlight of Osborne House is the excessive Indian decor in the Durbar Room, a venue for state banquets. A short walk leads through the palace gardens brings me to the unique private beach, where Queen Victoria’s bathing machine is on display. In Victoria’s days, the machine went all the way into the sea from where she took a swim. 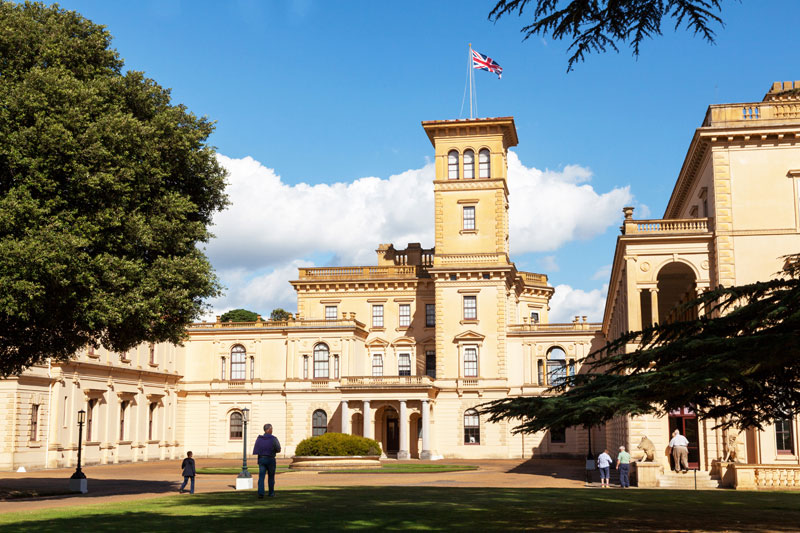 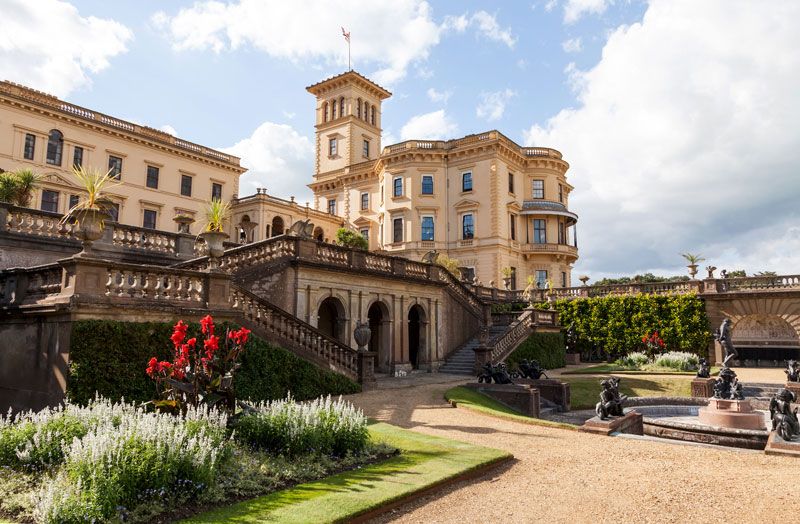 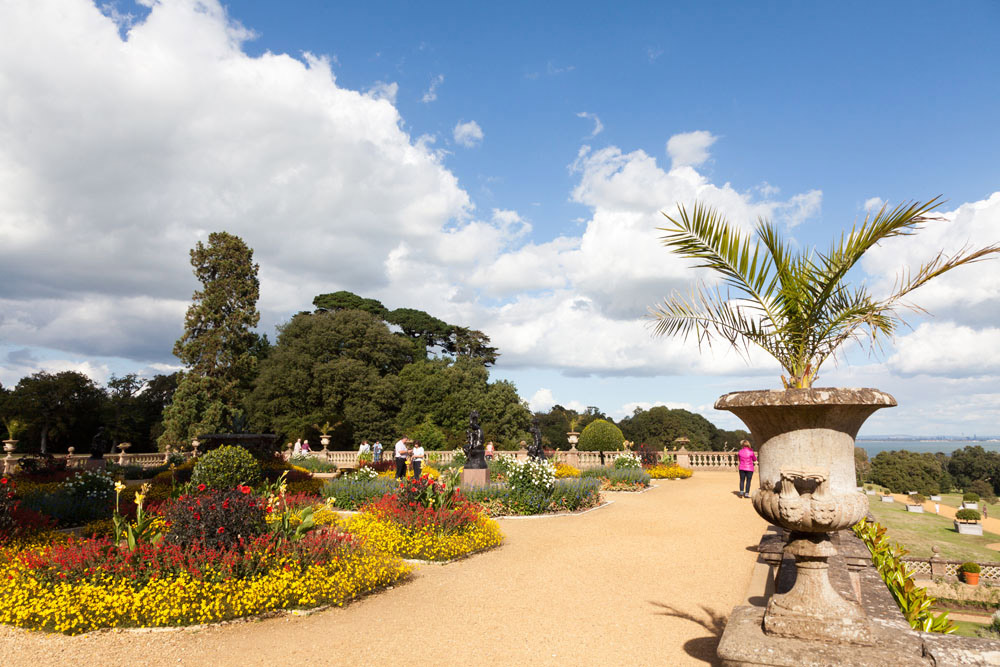 The Garden of Osbourne House on the Isle of Wight, England 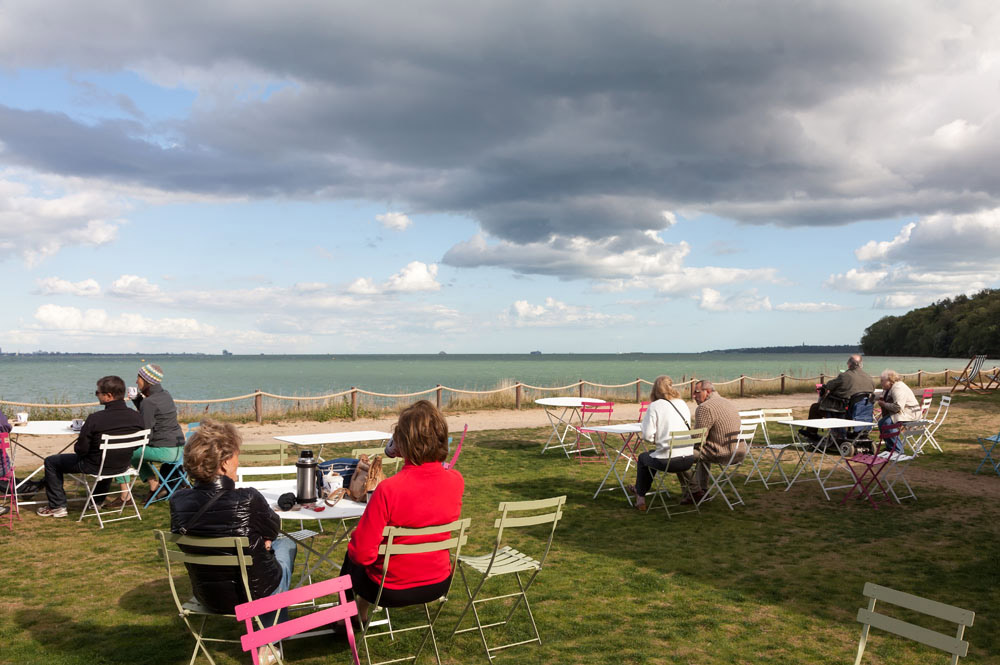 Drinking tea at Osbourne House on the Isle of Wight, England

During the first kilometres outside Cowes, the Solent keeps me company. This strait was created 7000 years ago when Wight came loose from the mainland. Once I go more inland, the Rolls Hill appear vicious bumps that cost a lot of energy. But after that things get easy again near Newton Salt Marsh. People with a sense of nostalgia are probably delighted to see the honesty box just before Shalfleet: for 40 pence you bay a big bag of apples here. The Dairy Farm Shop Deli, in 2011 the best food shop on the island, is also comforting and traditional: at the coffee shop, they serve cappuccino with excellent scones with award-winning clotted cream. The cows that previously took care of the milk are watching the customers from life-size posters on the wall. After Shalfleet I feel a strong wind, a sign that the west coast is within reach. 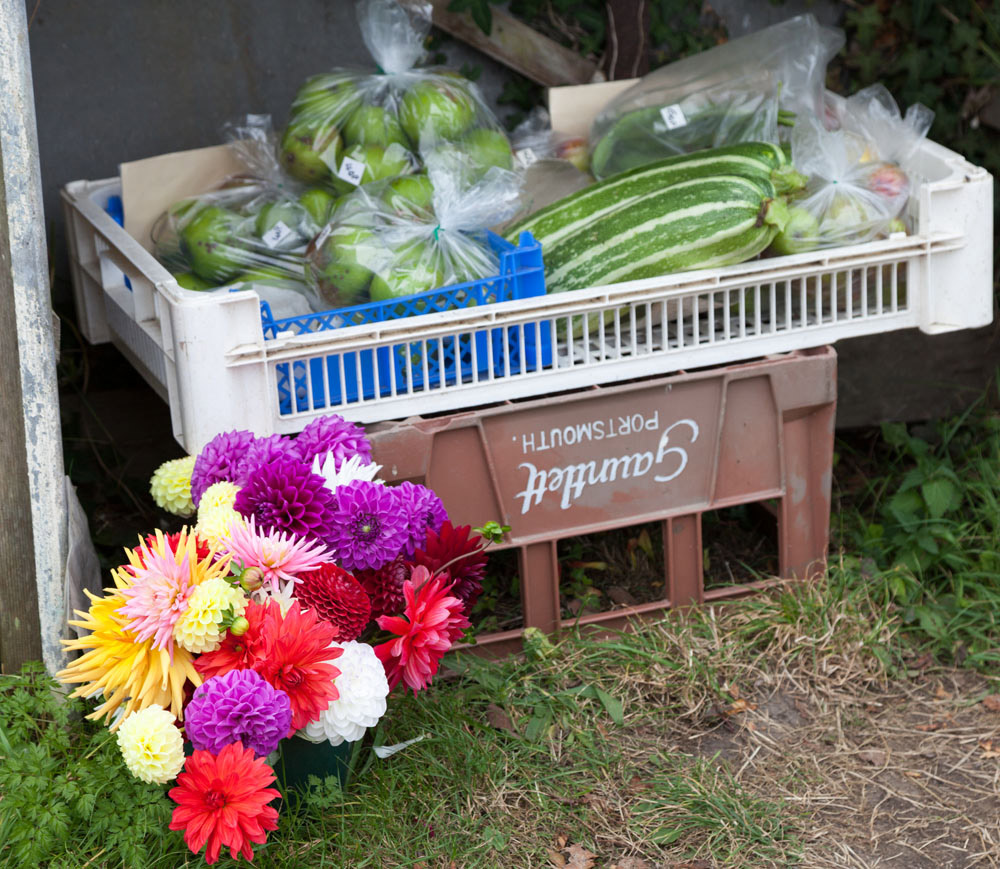 Honesty box at the Isle of Wight, England 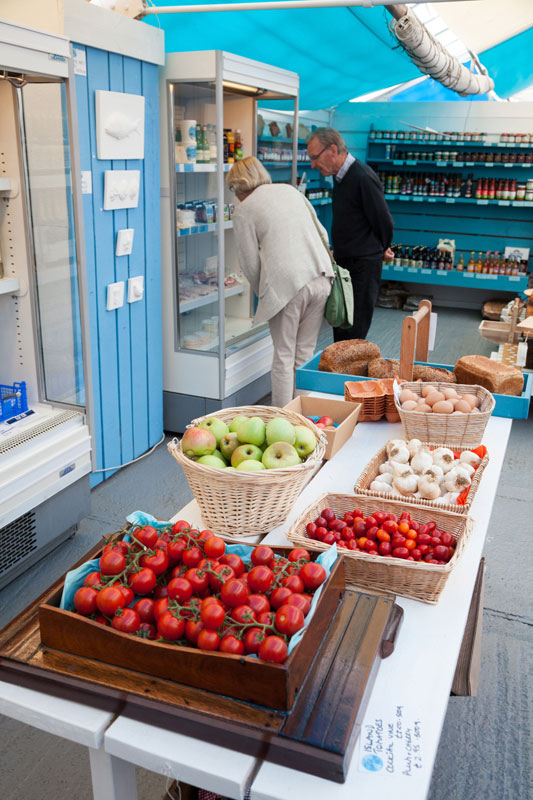 Buying fresh vegetables at a local shop at the Isle of Wight, England 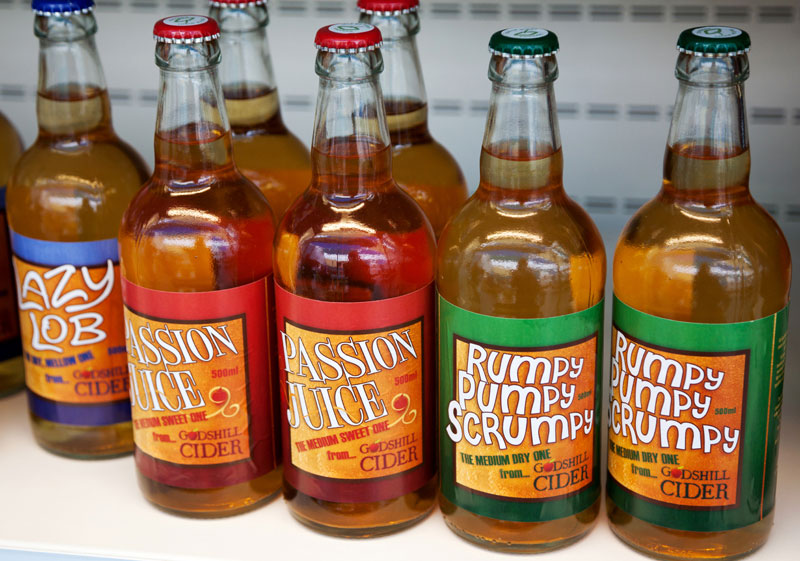 For sale: local cider at the Isle of Wight, England

Yarmouth, surrounded by the sea, a river and wetlands, is a delightful authentic village. It has a charming village square and a castle with a great picnic spot and a colourful port with a unique 200-meter long pier from 1876. For access to the last remaining fully wooden pier of the British Isles, you’ll have to pay a toll, 30 pence to be exact. The oldest town of the island is also the gateway to the peninsula. Thanks to the river Yar, it almost parted from the rest of Wight. 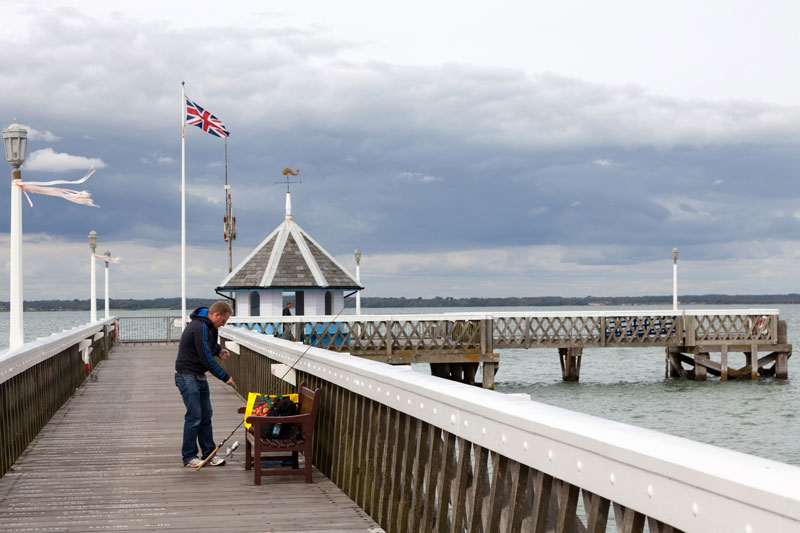 The pier of Yarmouth, Isle of Wight, England 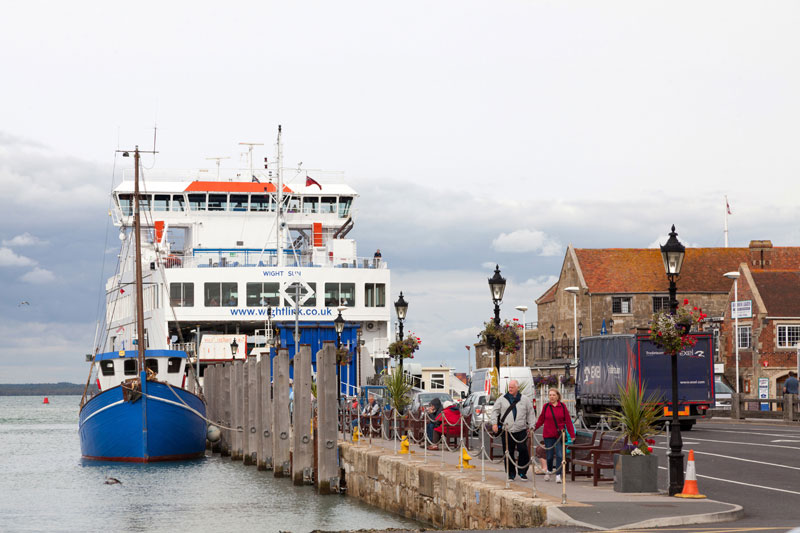 The ferry of Yarmouth, Isle of Wight, England

The colours of Alum Bay

At the very western tip lies Alum Bay, the bay with its famous multicoloured sandstone cliffs. The pebbly beach is a great place to see the sunset against the backdrop of the spectacular Needles, the vertical needle rocks that rise proudly from the waves. Once, in 1814, Jane Austen wrote about the love of her main character Fanny Price of Mansfield Park for this part of England: ‘She thinks of nothing but the Isle of Wight, and she calls it The Island as if there were no other island in the world.’ If there is one part of Wight that Fanny Price loved, it must be this magical beach. 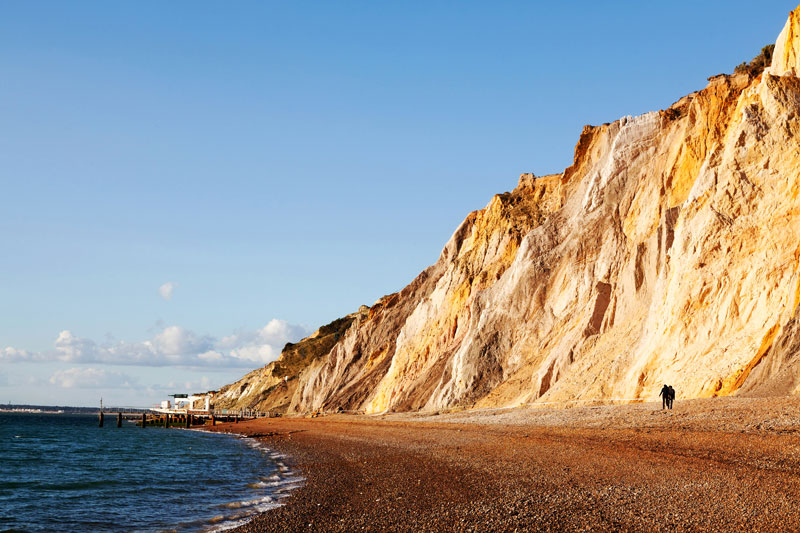 The mighty cliffs of Alum Bay, Isle of Wight, England

You don’t feel like cycling alone? Visit the Isle of Wight during Wight Cycling Festival (August/September). There is all kind of rides for all levels, sometimes with special themes. If you want, you can join a group. Surely you’ll meet nice people while discovering the best places on the island.

8 Irresistible hotspots for your city trip to London.BewarenBewaren